Halifax based Clearwater Seafoods will unveil its latest clam dragger December 21 at Pier 21. The boat arrived today and made a brief foray into Bedford Basin - no doubt to show off for the folks at Clearwater's HQ on the Bedford Highway.

The ship, named Anne Risley, is the second such ship in the fleet. Like the first, the Belle Carnell (both named for the founders' mothers) this is a conversion from a Norwegian platform supply vessel. Clearwater has had success with previous generations of clam dredgers converted from suppliers, but these two are much more sophisticated. 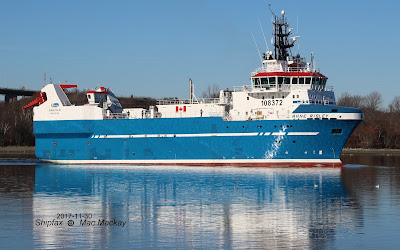 The ship has been given an enclosed working area and additional superstructure over what was once the cargo deck.
Built in 2010 by Severnaya Werf in St.Petersburg and completed by Hellesoyverft, in Lofallstrand, for OH Meling + Co AS as Siddis Supplier, the ship was converted by Astilleros Santander in Spain. It sailed from Santander November 15 and arrived at Mulgrave, NS (where it will be based) on November 25. Tonnage increased from 2656 as built to 4478 as converted. 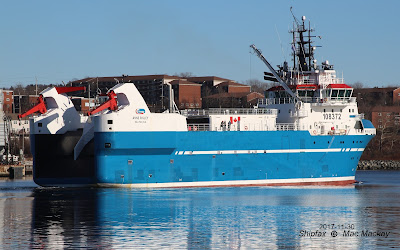 The clam dredge is worked over a stern ramp.
It is estimated that Clearwater spent in excess of $135mn on the two vessels, not including plant upgrades in Grand Bank, NL (where Belle Carnell is based) and in Glace Bay.
Last year Clearwater caught up to its quota of surf clams for the first time. 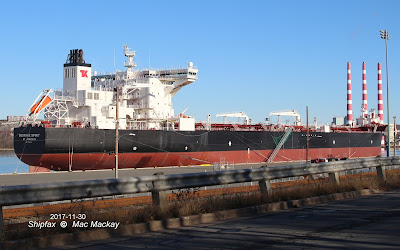 Besides the large bow structure that contains the cargo transfer gear, the ship is fitted with three forward and two aft thrusters (two forward and one aft are azimuthing - the others are tunnel type) and is classed DP2 for extremely accurate station keeping. It used two tugs on arrival, escorting it to Bedford Basin, turning it and bringing it back alongside Pier 9C starboard side to.

The 85,762 grt, 148,150 dwt ship was delivered in mid-October and sailed directly October 24 via the Panama Canal. It will outfit in Halifax before entering service. The ship will be followed very soon by the Norse Spirt which was accepted November 8, also at the Samsung Heavy Industry Shipyard. The third tanker, Dorset Spirit will be completed early in 2018. All three were named at a ceremony August 25 to honour three early cultures of Newfoundland and Labrador and Canada's eastern arctic.
Sadly the Beothuk of Newfoundland became extinct due to permanent European settlement. The Dorset were an early people of the arctic, whose extinction occurred at about the same time as the Norse arrived in 1000 to 1500 AD. They were succeeded by Thule and Innu, with whom there was apparently little if any contact.

Teekay Shipping, based in Vancouver, operates 40% of the world's shuttle tankers, most of which have been built by Samsung. These specialized tankers load at sea from monobuoys at the well sites and make relatively short trips to storage facilities or nearby refineries. They do not make the long world girdling trips of normal crude tankers. They are therefore fitted with a lot of extra gear, such as the bow loading, and station keeping equipment.