Activity at Richmond Terminals today included the cargo ship Thorco Logos. The Panama flag ship arrived yesterday and almost immediately began loading the components for cable storage. Crews in the holds began to assemble the pre-fabricated shapes into large circular racks (called tanks in the cable world).
This is the third ship from Thorco Shipping of Hellerup, Denmark to be fitted out similarly at Pier 9C in the last year. Thorco Liva was here from October 31 to November 15, 2016. It went to Portsmouth /  Newington, NH to load the cable and returned  to anchor in Bedford Basin January 9 to 22, 2017 then sailed to deliver its cargo. Thorco Luna was at Pier 9 from May 15 to 31, 2017. 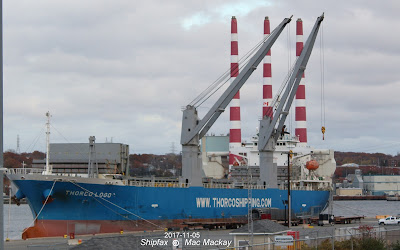 Thorco Logos (the "s" is barely visible) at Pier 9 C

The three ships are sisters, all built by Honda Heavy Industries in Saiki, Japan. Thorco Logos was built in 2015 and is a 13,100 grt, 16,970 dwt general cargo ships, with box shaped holds and removable tween decks. It is fitted with a pair of 50 tonne cranes. 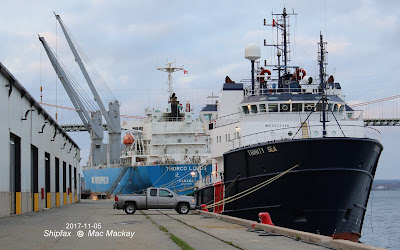 Trinity Sea with Thorco Logos in the back ground.

Meanwhile at Pier 9B the supplier Trinity Sea was waiting standing by for work, which will start tomorrow. It, and sister vessel Burin Sea have been contracted by ExxonMobil to assist the jack-up rig Noble Regina Allen.The rig will be working for up to two years plugging and abandoning 22 gas wells off Sable Island.


The rig is due in Halifax Monday November 6 from Invergordon, Scotland, aboard the heavy load carrier Forte. The ship is semi-submersible, and will float off the rig in the harbour sometime in the next few days. Should I be fortunate enough to get photos of that ship and its cargo, they will be posted here.