The federal Minister of Transport has announced an interim solution to replace the ferry Madeleine that operates between Souris, PE and Cap-aux-Meules, Iles de la Madeleine (aka Grindstone, Magdalen Islands), QC. 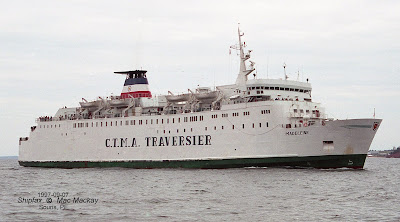 Built in 1981 by Verolme Cork in Cobh [Cork] Ireland the current ship carried the names Leinster until 1993, Isle of Inishmore until 1996 and Isle of Inishturk until acquired by the Canadain government in 1997. It has been operated by C.T.M.A (founded as Co-opérative de Transport Maritime et Aérien) ever since, (and has been repainted from the above colours.)

It was previously announced that Davie, Lévis would be building a replacement ship, but since that will not be available until 2026 (at the earliest) the government has announced plans to acquire an interim ship to be named Madeleine II, which will be operated from 2021 until 2026 when it will be sold.

The ship they have selected is sailing in Morocco as Villa de Teror for Nav.Trasmediterranea under Cyprus flag. The ship has a slightly spotted history, which is well documented by Wikipedia and does not need to be repeated here. It does seem odd that it should be for sale so soon after entering service,  but perhaps it is a distress sale due to Covid-19.

For an entertaining read see: https://en.wikipedia.org/wiki/MS_Villa_de_Teror

A "new" ship for the most part, it may be something of a white elephant when it comes time to sell it.  Let us hope that the Province of Quebec is no longer in the market for a ship in five years time. Based on the orginal Finnish desigm it should have a good ice rating, because it will be expected to run year round.

Davie will be building the new ferry - to be named Jean Lapierre and a replacement for Holiday Island which runs between Caribou, NS and Wood Islands, PE.