Although it appears to be wide, the entrance to Halifax harbour is in fact relatively narrow in places due to a dangerously craggy and rocky sea bottom. Therefore there are places where ships do not like to meet because they would be too close together. Fortunately however there are sections where there are two channels and that is where ships arrange to meet if possible. There is the eastern channel and the western or deep water channel.

The eastern channel is the main channel, preferred because it requires fewer sharp course changes. Inbound ships normally use  the eastern channel and outbound ships take the west channel to give the other ship lots of room. This results in a "port to port" meeting, the normal practice for ships, just as it is for cars on the road.

The two channels merge in an area just south of the most popular ship watching venue, Point Pleasant, in an area known as the Middle Ground. Careful timing is required by the ship's pilots so that they avoid meeting in the Middle Ground area wher the channel become narrow.

Early this afternoon HMCS Ville de Quebec was sailing and as it passed Pier C (PSA Halifax, formerly Halterm) it turned on a bit of speed so that it could reach the western channel before the inbound container ship exited the eastern channel. 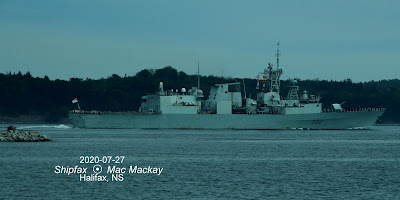 VdeQ kicks up a mini rooster tail as it passes the end of the Pier 42 extension. 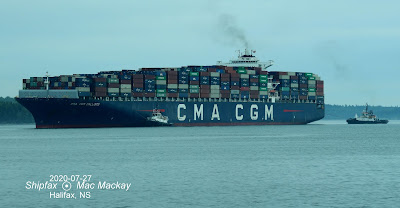 Tugs move into position to turn the ship to berth at Pier 41, PSA Halifax.