The small general cargo ship Wilson Mistral arrived from Montrose, Scotland late Friday July 3 and tied at Pier 9C on the Narrows. [My great-grandfather was born in Montrose in 1840.] 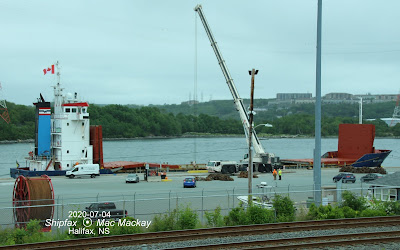 This morning a shore crane could be seen unloading large chain, which appears to be for offshore anchoring. Some plow type anchors have been sitting on the dock for some time. 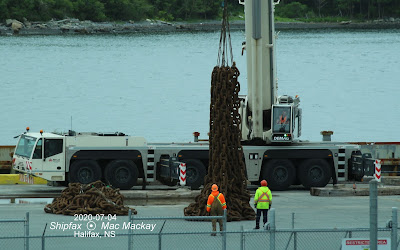 The ship was built in 1995 as Bermuda Islander and has since carried the names 99: Heereborg, 04: Alette, 05: Seawheel Venture, 08:  Anne, until 2018. It is a gearless, open hatch type vessel (it has square shaped holds, the same dimensions as the hatches), and can carry bulk or general cargoes. It is rated to carry 72 containers below deck and 213 on deck for a total of 205, including 30 reefers.
Owners and operators are Wilson, a large Norwegian operator of coastal ships. They record the builder as Helmers, Hoogezand, but my usual sources cite Tille, Koostertille, Netherlands.

The ship is expected to shift to pier 27 later this afternoon, likely for fuel.