More Pier 9C and beyond

Aside from regular port activity - that is scheduled shipping lines, with repetitive ships - Pier 9C is the location of unusual and "one of"  ships. Lately that has meant ships related to the decommissioning of the offshore gas fields.

Certainly that would explain the two Maersk tug/suppliers rafted together at the centre berth. 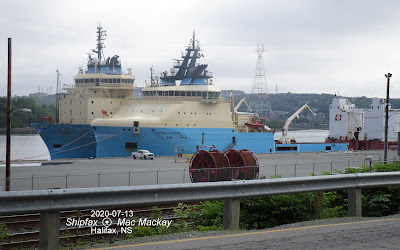 Maersk Detector on the outside of Maersk Cutter. Of very different designs, they are both equipped to support offshore activity and set anchors for rigs. Although both work for Maersk Supply Service Canada, under Canadian flag, they were both built in Chile, but by different ship yards. (Canada has a free trade agreement with Chile.) 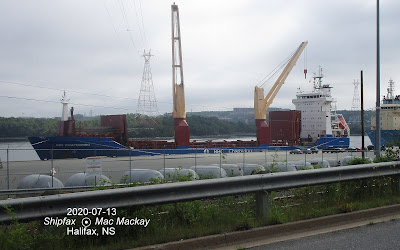 Built in 2008 by the Polish Shipyards Polnoca, completed by Remontowa, it was launched as Eugeniusz Kwiatkowski but completed with its present name. It is a 6115 gt, 7732 dwt ship with a pair of 120 tonne cranes. The ship has called in Halifax before for offshore related cargoes or to fit out to carry submarine cable. Its most recent visit was in February of this year, so it may be here to offload the cable racks.

At the south end of Pier 9C the big barge BOA Barge 37 finally made its move to the IEL dock in Woodside. The move had been planned for some time, but was postponed, I believe due to lack of visibility in fog. 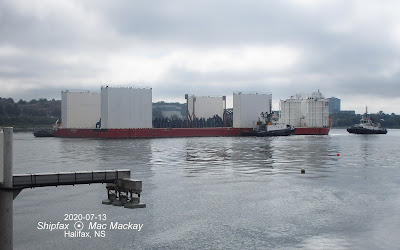 The barge is on long term charter to Halifax Shipyard, and has two uses. One is to transfer ship's hull components from the Woodside fabrication hall to the shipyard. It is also used to launch the Arctic Offshore Patrol Ships. The blue cradles on the deck are used to support the ship's hull or components. These will now be removed at the IEL dock.

As might be imagined the barge is idle a lot of the time. It was therefore available when COVID-19 delayed plans to install two new 300 tonne capacity cranes on the Hibernia offshore structure. The new crane was supposed to be installed by the giant crane ship Thialf but with time running out on its work off Nova Scotia plans had to change. Instead the cranes will be loaded onto the BOA Barge 34, and transferred to a storage site in Argentia, NL for installation next year.

There was also activity beyond Pier 9C today. At Cerscorp's Fairview Cove it was another visit of ONE Magnificence - so far the only ship of the Ocean Network Express to call here in the new magenta hull colour. (It was MOL Magnificence until early this year) But so far I have not been able to catch it with ideal lighting conditions or in the best location. (If it hadn't sailed during my dinner hour tonight I might have caught it this time.) 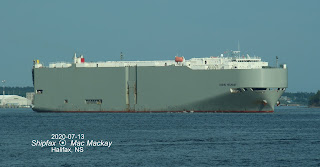 Built in 2009 by Toyohashi Shipbuilding Co Ltd the auto carrier is still in traditional K-Line colours. These are gradually being repainted with a new scheme. K-Line has kept ownership of all its ships except the container ships, which went into the One Network Express, ONE.