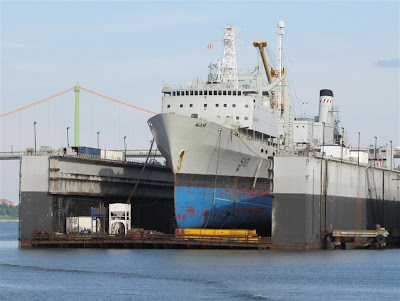 Today in Halifax the defence minister announced $2.6 bn in funding for two RCN supply ships to be built in Canada. This is down from the $2.9bn estimated price in 2008, which caused the project to be cancelled.
So it took 2 years and they have shaved a whopping 11% off the budget!
Can you believe that the price tag will not rise to $2.9 bn before it is done?
It will be another two years before we hear from shipyards on what they think the price will be, and then what happens? Do we go back to square one again?
Sorry, but colour me totally cynical on this one.
It is obvious that the navy has not pared back their requirements very much. (It is easy to lop 10% off any contract without giving up very much.)
It is obvious that the navy has convinced the government that more money was needed. (Their wish list is therefore pretty much intact, when a total rethink was necessary.)
It is obvious that the shipyards have not been involved yet, and so the $2.6bn is only a hoped for price. (Governments have a terrible record in predicting real world costs.)
It is obvious that this was no real announcement at all - just more politics.
It is obvious that no decision has been finally made on whether both ships will be built on this coast or by whom. (Yes the announcement was made here and yes the industry minister thinks Atlantic Canadians will be employed in the project, but who and where really needs to be decided, and two years is a long time to wait.)
The ships will take at least 5 years to build, and the present ships will be 45 or 46 years old by then and tens of millions will be spent keeping them pasted together in the meantime.
Posted by Mac at 3:00 PM