Yes it's over, but not completely. 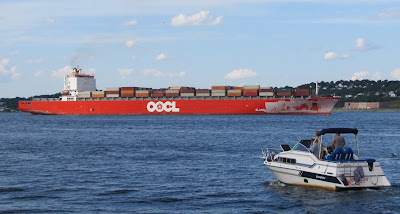 The Montreal longshoremen's walkout was resolved this morning by vote, but the writing was on the wall last night when negotiators reached a tentative settlement between the CUPE union and the Maritime Employers Association.
The dock workers will be back on the job in Montreal on Saturday to start unloading rail cars and will be ready for the first ship Sunday.
Meanwhile in Halifax, there is still work to be done. A huge number of additional containers has moved out of Halifax, including one train tonight half loaded with MSC containers. But there is still a number to go out, and there are more coming in by train.
MSC Freedom is due back on July 25 because some of its export containers are here already, but it is the only Montreal ship expected. (It will sail from here to Montreal, then to Caucedo, Dominican Republic, then to Freeport, Bahamas.)
Also in port is Maersk Patras, still unloading. Her outbound containers are en route here.
Valencia Express sailed early this morning and OOCL Montreal late this afternoon.
Posted by Mac at 9:56 PM