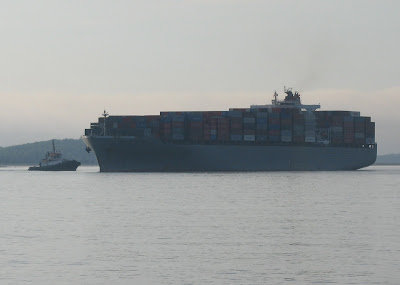 K-Line is gradually increasing the size of ships calling on its Halifax service. This morning was the first time that Glen Canyon Bridge has been here. The ship was built by Hyundai Heavy Industries of Korea in 2006 and measures 68,570 gross tons. It is rated at 5624 TEU, and appears to be close to capacity. However judging by its draft, it does not appear fully laden.
With the start of the pre-Christmas shipping season when North American and Europe are building up inventory for the late fall shopping boom, empty containers are being re-positioned to Asia. It is therefore possible that this ship is carrying a good many empties.
The tug Atlantic Oak is coming alongside to assist the ship into pier 41, Halterm.
Posted by Mac at 8:06 AM