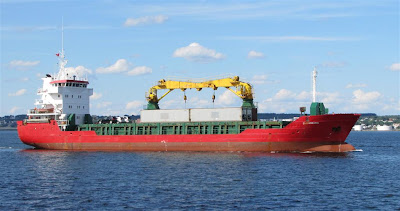 A new ship is doing the weekly run from Halifax to St-Pierre. Svendborg, registered in Gibraltar, but owned by Bischoff Shiffs, of Germany has been on the run for three weeks. Today is the first chance I've had, thanks to foggy weather, to get a proper picture of the ship.
Built in 1993, she can carry 185 TEU of which 50 can be reefers. She has two 25 tonne cranes, but has no RoRo capability, as you will see from the cars sitting on deck.
She appears to have had the same owners for most of her career, but she has had a large collection of names: built as Svendborg Governor, she became 93: IAL Governor, 94 Svendborg Governor, 02 CEC Svendborg, 02 Vedr, 02 CEC Svendborg, 03 NDS Kuito, 04 CEC Svendborg, 08 BBC Columbia.
Her predecessor on the run, Dutch Runner, a Canadian flagged RoRo ship, has been chartered to Desgagnés for the summer for arctic supply and is expected to return to the run in the fall.
Posted by Mac at 10:10 PM