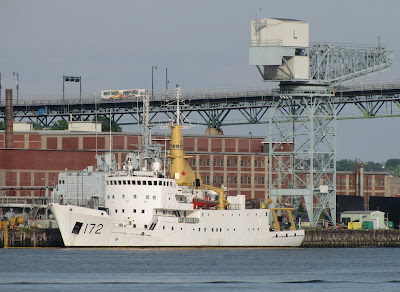 The Canadian navy's research vessel Quest AGOR 172 is tied up at Jetty November Lima, with a reported malfunction. The ship was supposed to participate in the activities and exercises associated with NATO and the International Fleet Review, but at the last minute something broke down, and she was unable to sail.
Instead she sits forlornly at NL along with the decommissioned Fraser and the remaining Oberon class submarines - not a good sign!
Quest was built way back in 1968 by Burrard DD in Vancouver and commissioned in 1969 for the Defense Research to do hydrographic, oceanographic and acoustical work. She had a major refit in 1997-1999 and another last year. Powered by four Fairbanks Morse diesel engines and two GE electric drives, she is one of the quietest ships afloat.
Interestingly she was the reviewing vessel when the last fleet review was held in Halifax in 1985.
There has been talk of a replacement for several years.
Posted by Mac at 1:26 PM