Back to Normal - almost

1. Dresden Express emerges from the fog inbound for Fairview Cove.

2. Atlantic Companion and Dresden Express working at Fairview at dusk.

Fairview Cove was back to normal today working the usual scheduled ships, Atlantic Companion and Dresden Express. Also normal for time of year was the foggy conditions outside the harbour. Dresden Express sounded her fog signal until she was inside Meagher's Beach, and finally emerged from the grey stuff at Ives Knoll. MSC Freedom is due tomorrow to reload.

Meanwhile at Halterm they had no arrivals or departures today, but Maersk Patras is still in port, waiting to resume her normal scheduled voyage next week. 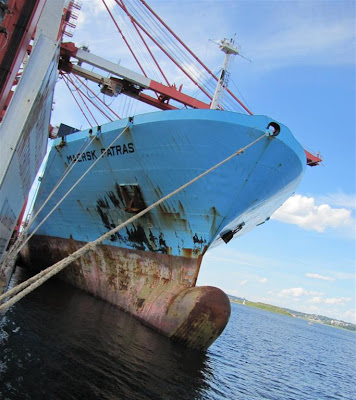