Ramping up for a busy time 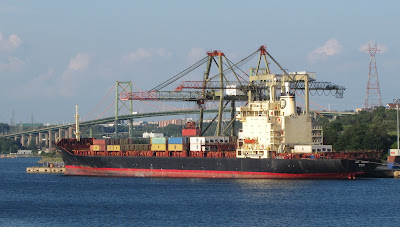 1.MSC Freedom berthed at Fairview Cove container terminal.
A stream of container ships is heading for Halifax because of the Montreal port lock-out.
Arrivals for today will include:
Maersk Patras- at Halterm. She would normally be calling Halifax next week, after going to Montreal.
MSC Freedom - docking Fairview Cove at noon time
MSC Aniello-anchored off Halifax, awaiting a berth
MSC Alyssa - will anchor off
Cabot - will move from Halterm to anchorage in Bedford Basin, awaiting cargo. She will likely be sailing later this week. Oceanex Sanderling is due tomorrow and Oceanex Avalon is discharging in St.John's, and will sail to Halifax.
Several more ships are due over the next few days.
Posted by Mac at 8:15 AM