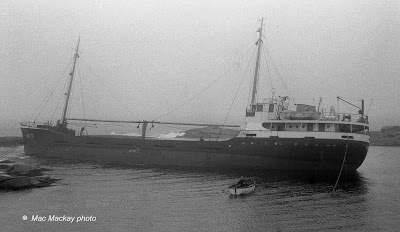 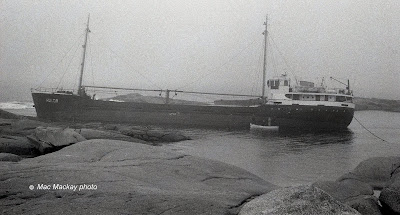 Word that the last of the contaminants have been removed from the wreck of the Miner on Scaterie Island is a bit of a relief to those concerned about the environment. However the wreck has now been left to deteriorate over the winter and it is hard to imagine what its situation may be by spring.
This ship is not the first to be wrecked on Nova Scotia coasts. The numbers in fact are in the hundreds, and most were left much as this one has been. Unofficial scavengers usually picked the ship clean of course, and the hulls were left to be torn apart by the seas.
One such wreck was the small cargo ship Hulda. It was driven ashore close to Peggy's Cove on a ballast voyage from Jacksonville, FL to Mahone Bay, NS on May 26, 1971. After all that was salvageable was removed from the ship, the remaining fuel on board was burned off October 23, 1971.
The ship was built as the Heemskerk in 1955 by NV Scheeps v/n de Groot & v. Vliet in Slikkerveer, Netherlands, and measured 499 gross tons. It was 183 feet long and consisted of a single hold with engines and accommodation aft. In 1979 it was sold by the original owners, Hollandsche Zeerederij of Rotterdam (J. Vermaas' Scheepv. Bedr. NV, managers) to Hilcur Shipping of Georgetown, Cayman Islands. They renamed the ship Hulda and were owners at the time of the loss.
.
Posted by Mac at 9:54 PM