Coming and Going, Big and Little

It was a day for arrivals and departures of all sizes in Halifax. With bad weather on the way later this afternoon, most ships would be happier to be in port, but several also left-good luck to them. 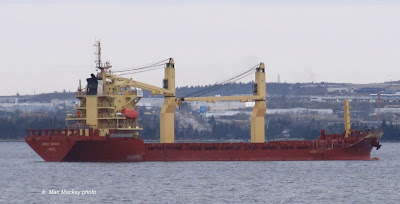 The bulker Onego Chinook sailed in to an anchorage in Bedford Basin. I expect she has a cargo of rails destined for pier 27, which is currently occupied by Amurborg, working the same cargo. Interestingly Onego Chinook is a sister to MCP Troodos still at anchor following some repairs. Onego Chinook is one of seven sister ships working for Onego, but managed by Interships. She was built with two 40 tonne cranes, whereas MCP Troodos was built as MCP Alstertal, a gearless ship, and had the larger 80 tonne cranes installed only last year, and operates for Interships/Hartmann directly.
Onego Chinook flies the flag of Cyprus and is5338 gross tons/ 7709 deadweight. It is operated out of Onego's New York office.

OOCL Shanghai arrived just as the snow started and tied up at Fairview Cove. A post-Panamax type of 66,289 gross tons, it carries 5,762 TEUs and is owned by ER Schiffs of Germany, flies the German flag and was built in 1999. 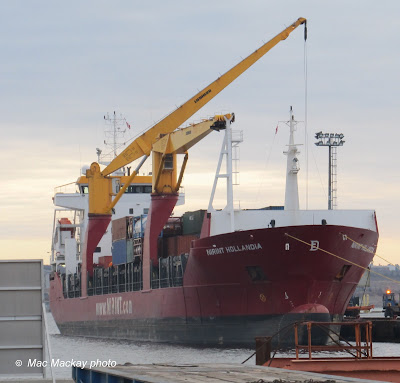 Nirint Hollandia unloaded her cargo of Cuban nickel ore and scurried off to sea again. She is very lightly loaded and will have an uncomfortable night at sea I expect. Built in 2007 it is owned by JW & PJ Danser (hence the "D" monogram on the bow) of the Netherlands and is managed by Wagenborg. It is a general cargo ship of 8999 gross tons and 12,000 deadweight.

The big tanker Mattea moved from her repair berth at pier 25-26 to an anchorage in Bedford Basin. This move was probably a precaution due to the high winds in the forecast. She will very likely be moving back to the pier once the system goes through. She is a Canadian flag, Hibernia shuttle tanker of 76,216 gross tons, 126,360 deadweight.

Also departing was the bulker Delos Ranger. This 31,1340 gross/ 54,057 deadweight ship built in 2008 flies the Bahamas flag and loaded gypsum. This is the first time she has ever been in Halifax and is a departure from the normal conveyor type self-unloaders we usually see. It is owned by Lagoon Shipholding Ltd and is managed by Enterprise Shipping & Trading of Athens.
And the grain carrier African Gardenia sailed with a load of food aid grain. She is a sister to several ships that specialize in carrying food aid grains. Built way back in 1981 she is a bulk carrier of 6498 gross and 9101 deadweight. Owned by a single ship company part of Elmira Shipping & Trading of Athens, she flies the Liberian flag.