1. Tortugas has slowed to allow the tug Atlantic Willow to make up. The ship still carries the traditional Wilhelmsen black funnel with two blue stripes, and painted on the bow is the company flag, a blue W on a white ground with blue outline.

2. Tortugas has been joined by the tug Atlantic Larch (forward) and is preparing to make the turn around Ives Knoll for Eastern Passage.

The Pure Car and Truck Carrier Tortugas arrived late this afternoon on the regular Bremerhaven, Zeebrugge, Southampton, Halifax run with another load of new cars for Autoport. The British registered ship is owned by the Wilhelmsen half of Wallenius Wilhelmsen Lines and was built in 2006. At 61,321 gross tons, it is a big ship, but with a capacity of 6,354 cars, but it is not the biggest of its type (the biggest can carry 7,500.) In a tradition dating back to the early 29th century Wilhelmsen ships' names start with the letter "T". As one might expect there have been repetitions of the name and this is at least the fourth ship of the name in the fleet. The first was built in 1923 and lost in World War II.
The Wilhelmsen company dates back to 1861 when it was founded in Tönsberg, Norway. It is not surprising that they have had many connections to Canada. These include at least a dozen sailing ships built in Canada in the mid 1800s. Two of their ships were wrecked in Nova Scotia, Heimdal on Sable Island in 1910 and even closer to home, Salerno wrecked on Litchfield Shoal at the entrance to Halifax Harbour in 1905.
No such fate awaits Tortugas I am sure, and she is scheduled to sail this evening for New York, Brunswick, GA and Charleston, SC before heading back across the Atlantic.
The 1967 photo below shows a typical Wilhelmsen ship of the 1960s. Tema was built in 1960 at Helsingör as Brookville for A.F.Klaeveness & Co of Oslo (also still operating, with ships in the CSL pool.) It was a general cargo ship of 5,430 gross tons with a speed of 12 knots and could carry 12 passengers. Wilhelmsen owned it from 1963-1971 and it was broken up in 1985. 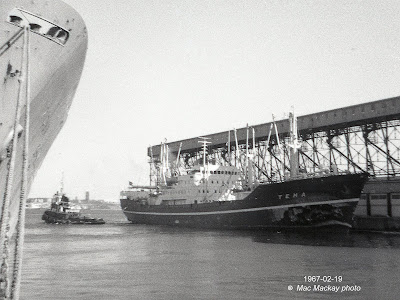 3. The tug Foundation Victor has just berthed Tema at pier 26. Freezing spray has formed in the pattern of the ship's bow wave. In the 1960s, when grain was a major export commodity in Halifax, the grain galleries extended to the end of pier 26 and pier 23.