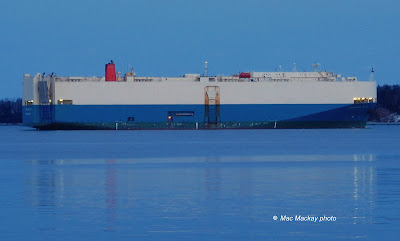 2. Alongside at Autoport this morning.
The auto carrier Cougar Ace arrived on one of its infrequent visits to Halifax. The ship achieved notoriety in 2006 when it was nearly lost off the Aleutian Islands. It was en route Japan to the west coast of North America and during ballast transfer operations the ship lost stability and listed to 60 degrees. The Air National Guard and USCG was able to air lift the 23 crew to safety and tugs took the vessel to more sheltered waters where it was eventually righted. It was then towed to California and unloaded. There were 4,703 Mazdas on board, all of which were then scrapped (a $117 mn loss to Mazda.) The ship was rebuilt and returned to service.
The salvage story in itself makes interesting reading CAUTION SOME ADULT LANGUAGE: http://www.wired.com/science/discoveries/magazine/16-03/ff_seacowboys?currentPage=all
The ship was built in Japan in 2003 and has a capacity of 5,542 autos.
The evolution of pure car carriers is an interesting one. These floating garages were at one time built on conventional cargo ship hulls, usually obsolete passenger cargo ships displaced by the container revolution. If you think the present ones are ugly, some of those originals were no beauties either.
There was then an interim phase during which purpose built car carriers still looked a lot like ships, but as time went by they began to maximize available space, reaching today's appearance [see also yesterday's posting.] At one time car makers such as Volkswagen and Nissan had their own ships, but now the common carriers have taken over, and all brands may be carried on the same ship.

3. The first generation of purpose built autocarriers, such as Savonita , built in 1971, and lengthened in 1976, looked a bit more like ships than the present day variety. They were relatively small, 5,536 gross tons in this case, but were soon replaced by larger ships. Savonita was broken up in Kaohsiung in 1987.

4. Some of the first dedicated car carriers were rebuilt cargo passenger ships. Hual Akarita started life as the handsome passenger cargo ship Amazon, (later Akaroa) built by Harland & Wolff in 1959 for the Royal Mail Lines. Rendered obsolete by air travel and containers, it was rebuilt as an autocarrier in 1972. The engines and accommodation were left amidships but the bridge was hoisted up and moved forward on top of the car garage. It was mercifully put out of its misery in Kaohsiung in 1981.
This is what she looked like before conversion:
http://www.shipsnostalgia.com/gallery/showphoto.php/photo/58278/title/akaroa/cat/520
http://www.shipsnostalgia.com/gallery/showphoto.php/photo/143177/title/amazon/cat/520
Amazing transformation.
.
Posted by Mac at 8:42 PM