Spruceglen going red, CSL Spirit getting in the spirit

CSL's Spruceglen is indeed going red. While in drydock at Halifax Shipyard, the bulker is being repainted in CSL red, the present hull colour for CSL's domestic fleet. I was not sure this would happen since she may be back in operation by the end of the month, but after a good hull cleaning the aluminum coloured primer was going on the other day, and today I see red.
This ship is one of several ships acquired by CSL and Algoma to fill the void left by older ships going for scrap and the delivery of newer ships building in China.
It now turns out of course that they have found work for gearless bulk carriers, despite very poor remuneration in the bulk trades (the Baltic Dry Index is in the doldrums.)
Although they are not lavishing large sums on these ships, they may now keep them going longer than I originally thought. 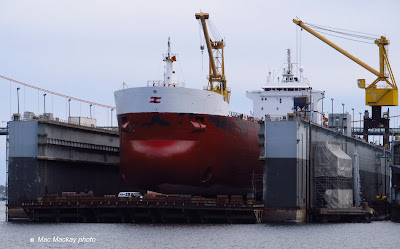 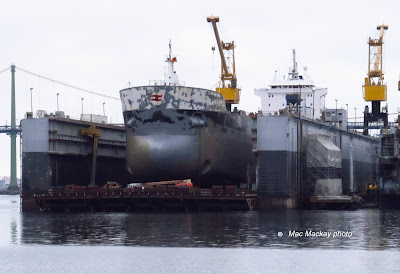 2. January 17, primer going on.
CSL Spirit is also getting in the act by acquiring the Canadian version of the CSL funnel marking. The traditional black/white/red horizontal strips are now only worn by the CSL International fleet. With CSL Spirit joining the domestic fleet it has now had the black and white stripes sloped down the after side of the funnel. Whether it will get the red hull too is another matter. 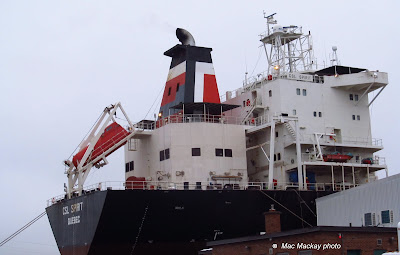 3. January 13, in transition. The domestic funnel colour scheme is on the side, with the remnants of the international (and traditional) scheme on the aft face. The crew has started to paint the aft face all black.