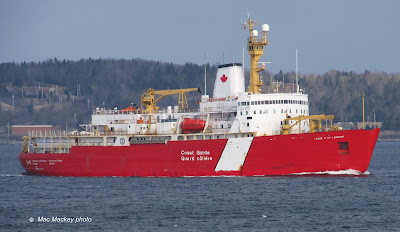 1. Louis doing donuts in the Basin at noon time today. 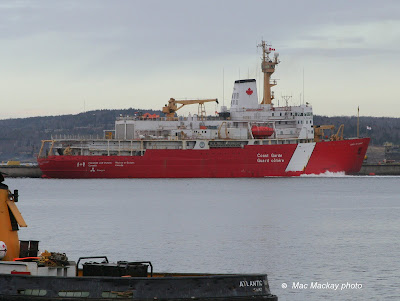 2. Yesterday they tried out the bubbler system. Soon after they lowered the lifeboat.

Once dubbed "the Hotel" because it remained in port for so long without moving, that is no longer the case with CCGS Louis S. St-Laurent. The rush to get the ship back in service for the Gulf icebreaking season after her centre prop repairs, saw the ship doing dockside trials yesterday and sea trials today.
After several loops around the Bedford Basin this morning to see if all was well and get all systems warmed up, the ship put out to sea for more trials. It now appears to be anchored for the night offshore.
Amendment: After going out to sea, the ship headed off to Newfoundland. It is scheduled for an alongside refit from January 26 to March 8. This would seem to preclude much icebreaking this winter.
Posted by Mac at 8:45 PM