1. Spruceglen is clear of pier 25-26, and the tugs have started to turn it northbound.

2. Lining up for the Novadock with the tug Atlantic Hemlock on the bow. The ship has pumped out most of its water ballast, and is sitting very high in the water. Its steering nozzle and prop are visible. 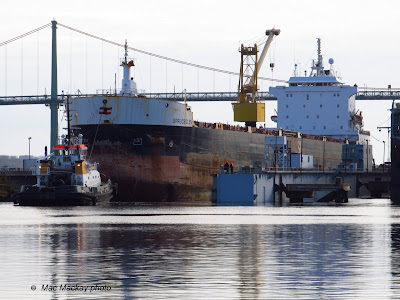 3. Almost in position, the ship fills the length of the drydock. 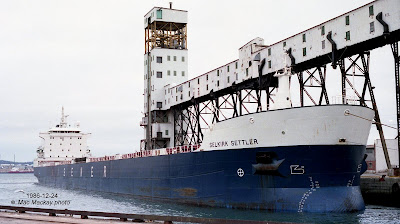 4. In its original colours, and with its original name, the ship is tied up at pier 25-26 in 1986. The grain leg was needed to unload the ship, which has no unloading gear.

The bulker Spruceglen made a cold move this morning to the Novadock at Halifax Shipyard. Although there were some crew members on the ship, it did not use its own engines - the tugs Atlantic Hemlock and Atlantic Larch did all the work.
The ship has a long history with Halifax. It was built by Govan Shipbuilders in Scotland and was launched without ceremony January 28, 1983. However there was a formal naming ceremony April 15 of the same year, and the ship's sponsor was Mrs Ann Day, the wife of Sir Graham Day. He is a Nova Scotian, knighted by the Queen for his role in the reorganization of the British shipbuilding industry.
The ship was built as Selkirk Settler named for the Scots immigrants to Prince Edward Island, Southern Ontario and Manitoba, arranged by Lord Selkirk in the early 1800s. The settlements were deemed to be failures in his lifetime, but the enterprises brought hundreds hardworking highlanders to Canada.
The ship went to work for its first owners, Misener Transportation of St.Catharines, ON, in the Great Lakes and North Atlantic grain trade. It and its two sisters were among the first ocean going ships built to maximum Seaway size to fly the Canadian flag.
In 1991 the ship was sold to Fednav and renamed Federal St.Louis but was soon resold to Japanese owners, placed under the Philippine flag and renamed Federal Fraser. It was chartered back to Fednav for ten years, and changed owners several times, and was reflagged to Hong Kong and later Panama.
In 2002 the ship was renamed Fraser when Fednav bought the ship back in order to sell it to Canada Steamship Lines, where it acquired the name Spruceglen.
(Fednav and CSL had a long standing relationship, under which Fednav assisted Paul Martin in buying and expanding CSL.)

The ship also returned to the Canadian flag, but continued with some international work, generally on the east coast of North America, and working on the Great Lakes.
It was a frequent caller in Halifax in its early days, while carrying grain, and in its CSL days, usually for bunkers or repairs.
The ship still carries the black hull paint which used to denote ships of the international fleet, and gearless bulkers in the domestic fleet. Most of the gearless CSL bulkers now have red hulls, and this may be the year for the change. We will keep watching the Novadock.
The ship measures 730'-1" long x 75'9" wide (the maximum allowable Seaway size when it was built) and has an ocean deadweight tonnage of 36,281 tonnes (at 32'-8" draft) or Seaway deadweight of 26,291 tonnes (at 26'-6" draft). It is powered by a 10,880 bhp Sulzer engine driving a controllable pitch prop in a steering nozzle. It also has a powerful bow thruster.
This is a well built ship, with a long lived slow speed engine, and can be expected to give many more years of service.
.
Posted by Mac at 12:24 PM