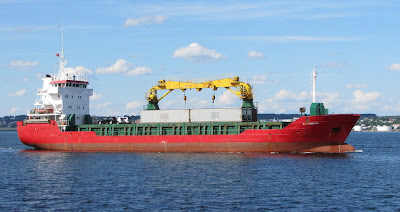 The German owned, Gibraltar flagged Svendborg issued a distress call on January 23 while on a voyage from Ipswich, England to Georgetown, Guyana.
The ship was a weekly caller in Halifax during July 2010 when it operated the shuttle service to St-Pierre et Miquelon. It replaced Dutch Runner on that service and in turn was replaced by Fusion, the present incumbent, in August 2010.
The ship is a small one of 2,462 gross tons/ 3,450 deadweifght, with a 185 TEU capacity and two 25 tonne cranes. It was built in 1993 and has had nine differtent names in its career so far.
The position of the distress call was given as 23-39.1N x 39-39.1W, which is roughly mid-Atlantic, 1,500 miles from Africa and 2,000 miles from South America, and maybe 750 miles northwest of the Cape Verde Islands. A very desolate spot when you need help.
I will post more details as they become known.
.
Posted by Mac at 7:43 PM