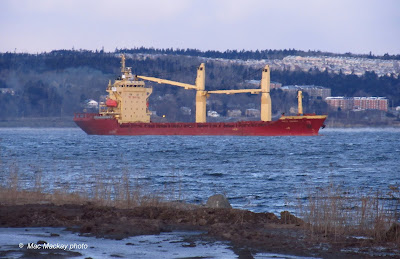 1. Anchors brought home, the ship has lost power and is drifting astern.

2. The re-start off Africville park was fairly dramatic. 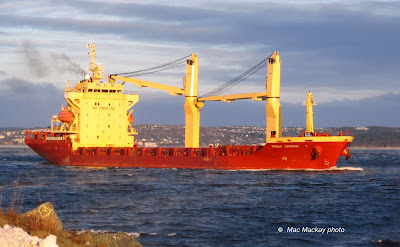 3. Underway towards the Narrows and into bright low sunshine.

As Onego Chinook got underway from Bedford Basin anchorage this morning, she had a main engine failure. Fortunately this did not occur in the Narrows, but still it was a bit closer to shore than desirable. After drifting around (and mostly astern) for several minutes, there was a spectacular restart - with lots of black smoke- and the ship got underway again.Her subsequent trip to pier 27 seems to have gone ahead without incident and the ship tied up ready to start unloading rails on Monday morning.
The very low sun was not terribly conducive to good photography and it was a cold and breezy morning (minus 15 C and 20 knots.) The deck crew remained in position in case they had to drop anchor - they must have been colder than me!
The recent incident with sister MCP Troodos and many other ships on the St.Lawrence River in the past month, where they have had cooling water problems, may have been the cause of today's incident. In which case it points out that many ships sailing our waters in winter time are not properly prepared to do so. Ice crystalizes in the ship's cooling water intake and the engine shuts down due to overheating. It is only a matter of time before one of these ships gets into real trouble. Interestingly Onego Chinook and MCP Troodos have two main engines, which should provide redundancy in most situations. However a common cooling water system - or an unsuitable one for freezing conditions- will shut down both engines.
.
Posted by Mac at 7:30 PM