A hastily renamed Algoma Value put in to Halifax today for bunkers and stores. This is a first time visit here for the ship which was acquired by Algoma late last year. In a deal that saw all of the Klaveness bulkers in the CSL Pool sold to other pool members, CSL., Algoma and Marbulk, Algoma acquired the former Baldock.and Balchen.
(Marbulk Shipping, 50% owned by Algoma and 50% by CSL acquired Balder and CSL bought Balto and Barkald.)
Since taking over Baldock in January, Algoma has painted out the "K" on the funnel, part of the bow crest and the former name. The new name was obviously applied in a hurry and maybe in a high wind!. 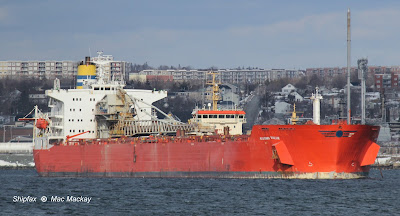 Built originally as a single hull tanker by Mitsui Engineering and Shipbuilding Chiba Works in Ichihara, Japan in 1981, the ship was named Polysunrise and then measured 37,904 grt, 61,438 dwt. It was sold and renamed Berthea in 1990. As single hull tankers were phased out in favour of double hulls, it was sold to Klaveness  in 2006.

A new self-unloading bulk carrier forebody was built and connected to the existing stern section giving a ship of 46,068 grt, 75,569 dwt. Renamed Baldock it was placed under CSL International management in the CSL self-unloader pool and was a common visitor on the Strait of Canso where it offloaded coal at Point Tupper and loaded aggregates at Auld's Cove. It is expected to remain in that trade under Algoma Shipping Ltd ownership, flying the Marshal Islands flag.

This is the first time that the ship has been in Halifax under any name as far as I am aware*. 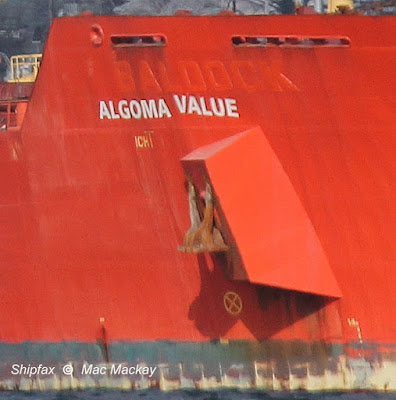 The ship's former name is still visible above the slightly askew new one.

* Thanks to Halifax Shipping News, I am now aware. Baldock was here in August 2011 for bunkers. I was out of town that month so missed logging it in.