With the US economy on the rise there is an increased demand for gypsum. It is not exactly a boom time, but there seems to be more product moving out of the National Gypsum facility in Wright's Cove theses days.
The most frequent ship recently has been CSL Metis, which arrived this morning. 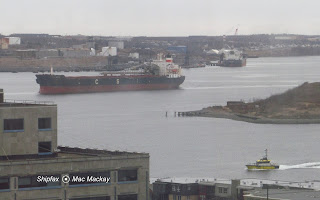 CSL Metis swings east around George's Island as the pilot boat Chebucto Pilot comes in west of the island. That is Energy Progress unloading at Imperial Oil. 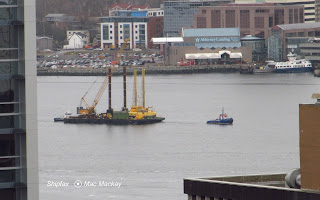 Arrival time was coordinated to allow the tugs Belle D (towing) and Halifax Tugger (pushing) the McNally crane barge Derrick #4 to clear the Narrows. The barge had been spudded down in Turples Cove near the MacKay bridge, and was moving to the Woodside area. McNally has at least four tugs in port right now, but they were all busy with other work, so they called in RMI Marine to do the shift. 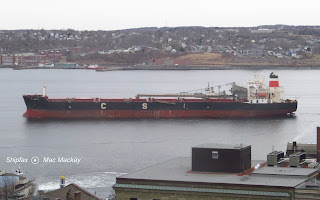 CSL Metis with Atlantic Willow in company, crosses the ferry track heading for the Narrows.