The Antigua and Barbuda flagged Onego Batz backed in to pier 27 this afternoon with a cargo of rail. 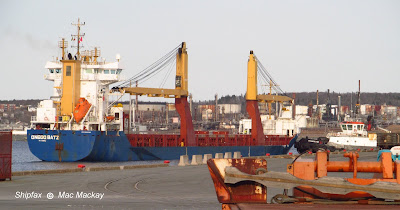 Onego Batz backs into pier 27 with the assistance of Atlantic Fir.
[see today's Tugfax for more on the tug.]

Although operating for Onego Shipping, it is owned by Eckhoff of Jork, Germany and is working under its fourth name. It started out as Ile de Molene (although another source says Ile de Batz) in 2004 when it was completed by Damen Hoogezand, Foxhol. The bare hull had been started in Damen's Galati, Romania yard and towed to Holland for completion. It was renamed S. Pacific the same year, became Batz in 2010 and BBC Chile in 2012. It took its present name in 2015.

A multi-purpose type combi-carrier, the ship measures 7813 grt, 10,385 dwt and carried a pair of 80 tonne cranes and is ice class 1A.. It has the hull sponsons typical of the Damen standard ships of its type.