Thanks to an interruption of internet service from March 23 to 28, I was unable to post my usual weekend round up until now. Here are the highlights on a better late than never basis:

The Atlantic RoRo Carriers ship Warnow Star made its first Halifax call on Good Friday March 25, no doubt discharging Its usual cargo of  depleted radioactive material. ARRCC ships usually make only a brief call of a few hours, but this time it remained over night and sailed on Saturday. 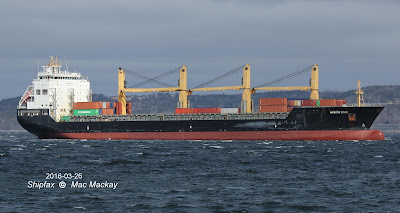 After leaving Fairview Cove Warnow Star lines up for the MacKay bridge on a windy morning.

The ship was built in 2010 by Zhejiang Ouhu Shipbuilding Co in Zhoushan, China and carries four 60 tonne cranes. It measures 22,863 grt, 33,150 dwt. It is a sister of Warnow Sun that was in port February 28-29, but for some reason is not listed on the Atlantic RoRo Carriers web site, nor does it appear to be owned by ARRC of Hoboken, NJ, but by Atlantic Ship Manangerment of Odessa, Ukraine.
As I mentioned before the Warnow name comes from Warnowerft yard in Warnemunde were ARCC's Astrakhan class RoRos were built.[see below for more Warnow.]


A rare visit of a bulk carrier took place on Saturday March 26. JS Missouri was on its way to Baie-Comeau and stopped in for bunkers.  The ship will be loading grain in Baie-Comeau and the crew was busy cleaning and airing the holds, so the ship arrived looking a bit like an accordion as the hatch covers were cracked open.

JS Missouri strides in to port with anchor ready to let go, and hatches ajar.


Also a rare sight these days is an Indian flagged ship. The tanker Swarna Mala is a typical handysize product tanker built by STX in Jinhae, South Korea. It was laid down for Greek owners as Zefiros,  but SCI purchased it "on the stocks" and it was launched and delivered as Swarna Mala. 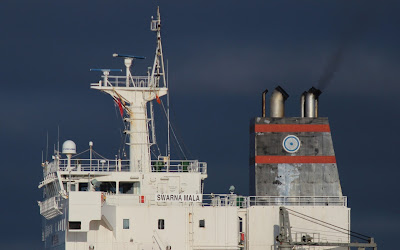 It has been a long time since the bicycle wheel funnel mark has been seen in this port.


The Shipping Corporation of India was once a frequent caller in the general cargo ship days, and operated its own cargo liner route under the Scindia label. The ships all had names begining with "Jala". 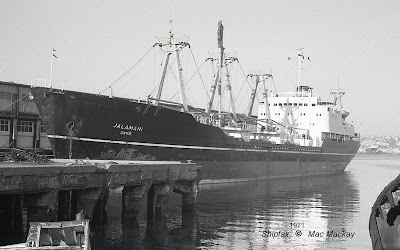 Jalamani was built in 1970 by VEB Warnowerft in Warnemunde, East Germany It carried one 60 ton jumbo derrick and sixteen 10 ton derricks on bi-pod masts. It measured  9556 grt, 13814 dwt and was broken up in Calcutta in October 1986. It is shown at what is now navy pier Bravo, but was then a National Harbours Board pier in the spring of 1971.


Back from mid-life refit at the Davie Quebec yard, CCGS Earl Grey was tied up at BIO on Easter Sunday. 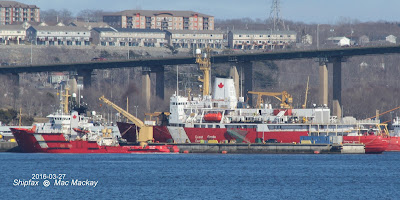 Earl Grey joins Louis St-Laurent at BIO, filling up available pier space.
The Canadian Coast Guard is planning a major Search and Rescue exercise off Nova Scotia this week and CCGS Sir Wilfred Grenfell came in from Newfoundland to participate. There was no room at BIO so it tied up at pier 9A. 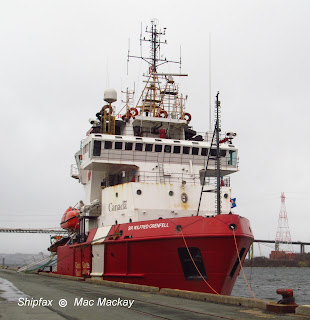 Sir Wilfred Grenfell at pier 9A this afternoon.

The Newfoundland based Teleost was also in Halifax recently as was the Cape Roger. 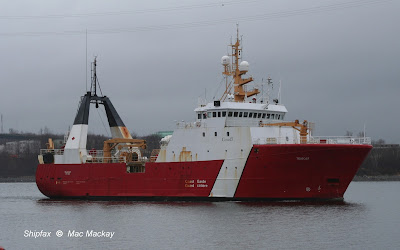 
Arriving Easter Sunday morning, Wilhelmsen's Talia proceeded directly to Autoport. However Autoport is so full of new cars that unloading took much longer than normal as each car had to be driven a much greater distance to a remote storage facility. Demand for cars is so high in Canada (with low interest rates and lengthy payment periods) that it is hard to keep up with demand. 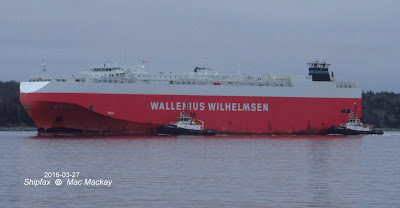 CN which owns and operates Autoport and also provides the rail service to move the cars inland has had some weather challenges this winter, but it is more  the shear volume of imports that is stretching their ability to move the cars out.

Talia was finally able to sail Tuesday afternoon March 29 - surely a lengthy stay! It will be followed almost immediately by Manon with more of the same.