Two more abandoned vessels will go under the hammer in the coming weeks as the painfully slow process of cleaning up derelicts continues.

First to go was the tug Craig Trans see Tugfax here: sold in Halifax February 17 for a mere $1,000, to a buyer who promised to take it away and dispose of it.

Next to go on the block will be Atlantic Pursuit "as is, where" in Grand Bank, NL. On December 5, 2006 it was struck by a wave which broke the wheelhouse windows and it lost all power. CCGS Cygnus and Arctic Endurance took off the crew of more than 20 and landed them safely. The tug Point Vim towed the derelict into Bay Bulls and eventually back to its home port of Grand Bank. Since the boat was to be retired in 2007 anyway, it was sold for scrap. 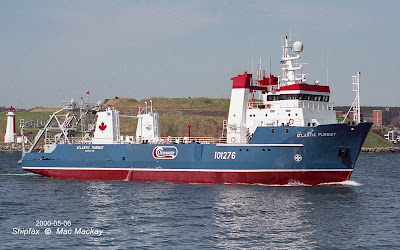 Atlantic Pursuit on a rare visit to Halifax - it fished out of Grand Bank. NL

It was built as a North Sea pipe carrier by Jadewerft in Wilhelmshaven for Surf + Cie, Chambon of France as Atlantide. Seaforth Maritime Ltd of Aberdeen, Scotland acquired it in 1982, initially naming it Ashburton Lion, but renaming it Seaforth Prince later that year. Clearwater Seafoods bought it in 1988 and it was delivered to Pictou for conversion to a clam dredger. 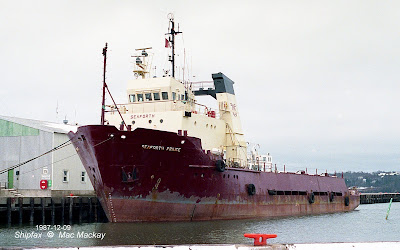 Seaforth Prince was a typical pipe carrier with a wide open after deck, seen here shortly after arriving in Pictou, NS for conversion.

That rebuilding was completed in 1988 and it fished out of Grand Bank. At some later date the wheelhouse was widened (as seen in the upper picture). 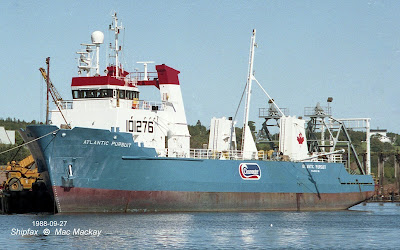 As a clam dragger it worked its dredge over the stern. The forward structure was largely unchanged, but there was more crew accommodation added and processing equipment added below deck.
The second set of funnels aft seem to have been for auxiliary equipment.

The first scrap buyer removed useful equipment but resold the boat for conversion to a cargo ship for a planned service between Newfoundland and the Azores. That owner fell ill and resold the boat to Yacht Bilgin Shipyard Europe LDA, which seems to have gone out of business, leaving the boat to pile up wharfage and other costs, forcing a Federal court ordered seizure in November of last year.

Early next month the abandoned trawler Tenacity I will be sold by Federal court order "as is, where is" in Riverport, NS. Built in 1967 it enjoyed a long working career until it was sold for scrap. However that buyer walked away from the boat and left it at the Kraut Point Wharf at the mouth of the La Have River. 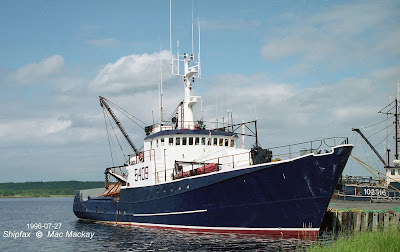 Seen at La Have, NS, under Himmelman ownership in 1996, the name was painted out oas if it were to be renamed, however it remained as Tenacity I.

Built in 1967 as Scotia Point by Saint John Dry Dock and Shipbuilding, it was one of four sisters designed by the noted trawler architect Conrad Birkhoff for Superior Sea Foods of Yarmouth, NS as a herring seiner. The company was owned by K.C.Irving and Samuel Bronfman, and intended to build nineteen seiners, but the fishery collapsed and the boats were sold. Scotia Point then went to Scotia Point Fisheries in Wilson's Beach, Campobello Island, NB, and in 1982 to Connors Brothers in Black's Harbour, NB who renamed it Senator Don. Laurence Sweeney Fisheries of Yarmouth bought it in 1986, renamed it Tencity I and converted it to a scallop dragger. David Himmelman of a Have, NS bought it in 1994 and finally Clearwater Fisheries of Halifax acquired it in 1996. After a few years in that service it was laid up and sold for scrap.

Neither boat is expected to fetch enough to cover accumulated claims due to low scrap metal prices, but if they are sold they will at least be removed from their current resting places.