There was a lot of harbour activity this weekend, so I will compress it chronologically.


The Italian tanker Valle Azzurra completed unloading at Imperial Oil and moved out to number one anchorage briefly for bunkers.It arrived March 8. 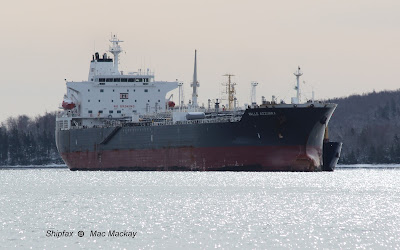 Meanwhile the tanker Ajax remained at anchor in Bedford Basin. It arrived March 9. 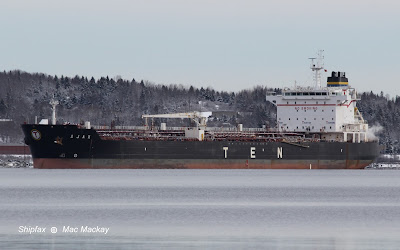 Built in 2005 as Western Baltic by Hyundai Mipo, Ulsan, South Korea, it flies the Bahamas flag for Tsakos Shipping + Trading SA of Athens and took its present name in 2006.


The handsome Bahri Tabuk made one of its regular appearances. The last two visits by Saudi ships have been to Fairview Cove, forsaking their former berth at pier 31. The new arrangement will make it impossible to see the interesting variety of RoRo cargo they handle (including the recent controversial military vehicles.) 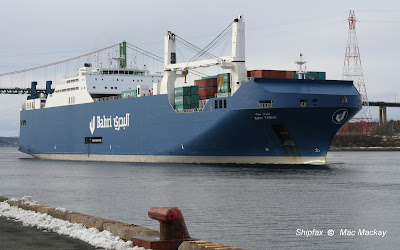 It also worked containers, which were handled more speedily by Cerescorp's cranes than they would be by the single crane at pier 31.

Galaxy Ace was an Autoport visitor. With a 6400 car capacity it is among the largest pure car and truck carriers that call in Halifax. 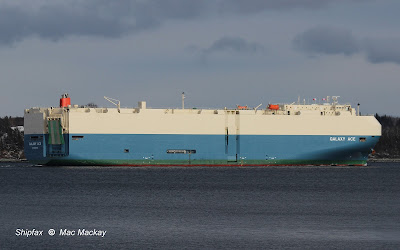 Onego Batz completed unloading rails at pier 27 and sailed in the evening. 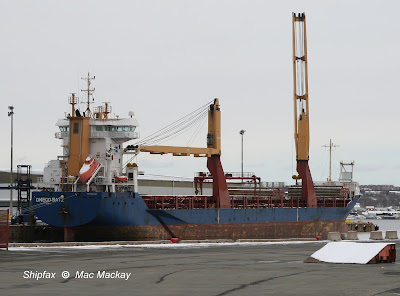 The ship was in port for eight days.See also March 4
It probably lost some time due to last Saturday's heavy snow and Friday's added snow. Only a little of that was left by the time it sailed.

At BIO the research ship Teleost was tied up alongside. The Newfoundland based trawler often calls in Halifax when there is ice in the Gulf. 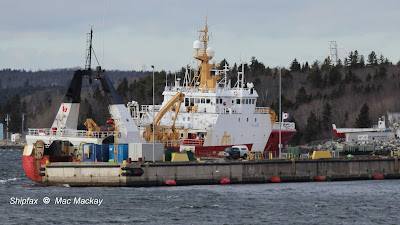 Nearby the former CCGS Matthew (now renamed 2015-03) is being readied for disposal after a four year layup. A crudely applied coat of red paint over its CCGS markings has already been washed away near the waterline. 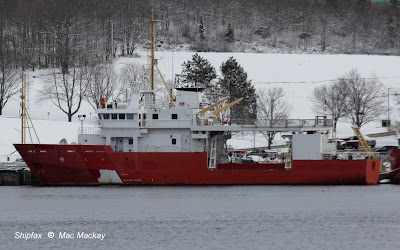 Built in 1990 by Versatile Pacific Shipyard in Victoria, BC for hydrographic survey work, it was named for John Cabot's ship (and John Cabot's son) and appropriately did a great deal of its seasonal survey work in Newfoundland. Laid up in 2012 due to budget cuts, the ship was in prime condition at the time. 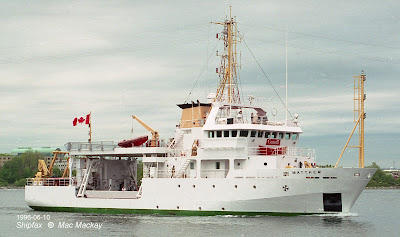 Originally based in Newfoundland, it was transferred to the Bedford Institute in 1991 when CSS Baffin was decommissioned. Painted red in 1997, it looked immeasurably better in white. 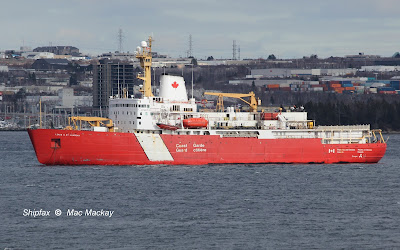 The icebreaker has been working mostly in the Strait of Belle Isle this winter, which has not been a particularly heavy one for ice in the Gulf of St.Lawrence.  Nominally based in Newfoundland by the last government, lets hope it can be returned to its real home of Halifax where it spends a great deal of time. 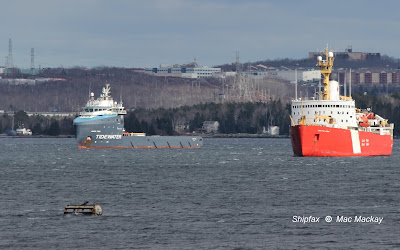 With two anchors out, the ship was twisting around into all sorts of strange positions in the gusty wind, while the nearby supplier Jones Tide maintained station by dynamic positioning and barely moved and inch.The laid up trawler Hydra Mariner is in the background in Wright's Cove.

Atlantic Compass sailed this afternoon, making a quick half day visit. I am taking every opportunity to get a shot of the G3 ACL ships as they are on their way out. Atlantic Conveyor is now en route to the scrappers, having made its last call in Halifax March 2. Its replacement, Atlantic Sail, is due later this month. 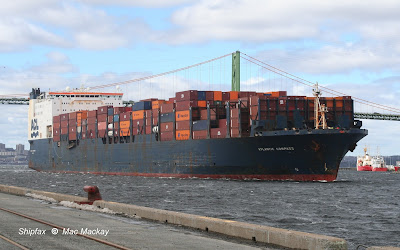 The escort tug Atlantic Oak is not visible astern of the Atlantic Compass. It has veered out to port to make the turn past the Pier 9A - Pier 9 knuckle.

The Nova Scotia Power Corp generating station at Tuft's Cove can burn natural gas or heavy oil, and was due for some of the latter today aboard the tanker Overseas Jademar. However at some point on its inbound transit it was decided to bypass the power plant and go to anchor in Bedford Basin, more than likely due to the high winds blasting down the Narrows. 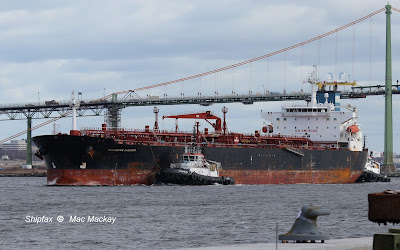 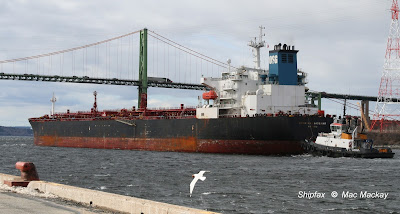 At 4,000 bhp Atlantic Willow does not usually escort ships through the Narrows. That work is left to the 5,000 bhp tugs [see Tugfax]. It also took up an unusual close tethered position hard on the ship's stern.

A product of Daewoo Shipbuilding and Marine Engineering Co in Okpo, South Korea, the ship was delivered in 2002 as Jademar and was renamed in 2005. Slightly larger than the typical 50,000 dwt handysize product tankers, the crude oil tanker measures 40,343 grt and 69,708 dwt. It is registered in the Marshal Islands for Overseas Shipholding Group of New York.

Next through the Narrows was NYK Constellation bound for Fairview Cove, joining Dalian Express (not pictured).

The 55,534 grt, 65,919 dwt NYK Constellation came out of Hyundai, Ulsan, South Korea in 2007. With a capacity of 4922 TEU (330 reefers) it is considered to be a small container ship on major routes in these days of giants.It flies the Marshal Islands flag for Kobe Shipping Co Ltd.

It was not all work in Halifax harbour today. The first day of Daylight Saving Time saw temperatures rise to plus 7, however the wind was very brisk and very cold. A great day for winter sailing, and the Royal Canadian Navy's STV Tuna took full advantage. 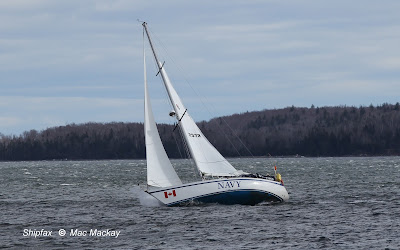 The 36 foot sloop, dating from 1985 is based at the Shearwater Yacht Club in Halifax and offers sail training opportunities to Canadian military and civilian employees. Let's hope this is a sign of an early spring.