A baseball analogy seems appropriate as spring is here and the baseball season will soon be in full swing.
Spring is also a good time for ship refits after enduring the rigours of winter. Oceanex is taking this opportunity to send two of its ships in turn for refits in Gibraltar. First to go was Oceanex Connaigra. Its place on the St.John's / Montreal run was taken by the chartered Stena Carrier. On its return from the shipyard, Oceanex Connaigra shifted to the Halifax run, arriving here yesterday morning, tying up at pier 36. It shifted to pier 41 this morning. 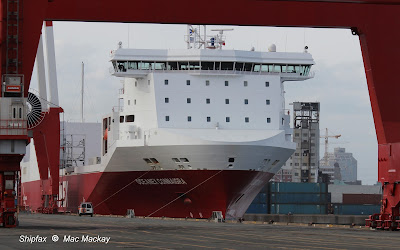 Linehandlers have singled up the headlines as the ship prepares to leave pier 41 for Autoport.

This afternoon it shifted again, this time to Autport to take on a load of cars for Newfoundland. It will move back to pier 41 this evening and to complete loading containers and RoRo trailers tomorrow.

Showing off its fresh paint, the ship moves through number one anchorage on its way across to Eastern Passage. High winds are picking up some spray and creating a mist.

According to the Oceanex schedule the ship will serve Halifax until mid-May when Oceanex Sanderling is due back from its refit in Gibraltar. Stena Carrier will continue to operate to Montreal until that time, when Oceanex Connaigra will return to its customary route.

Oceanex Connaigra was built in 2013 by Flensburger Shiffbau Gesellschaft in Germany especially for Oceanex to operate on either the Halifax or Montreal runs. The 26,768 grt ship can carry 10,000 1,000! TEU and has 5 RoRo decks with a capacity of 95 trailers or 500 autos. After some initial teething problems that kept it out of service for lengthy periods in late 2013 and early 2014 it settled in to the Montreal run, maintaining close to its 20 knot service speed.