To scrap or not

While there is little doubt that all warships will be scrapped eventually, and that they contain much potentially recyclable material, such as high grade wiring, piping and other materials aside from the high quality hull steel, such is not the case with merchant ships. Whether to scrap them or eke another few years of earning is a conundrum for ship owners.

The world's shipping industry is another trough with staggering numbers of laid up or under utilized ships.There are nearly 350 container ships laid up as an example. Asia-Europe trade, where most of them were working is in a major slump and the supply of container ships far exceeds demand. Larger and still larger container ships are still being delivered, despite some cancellations. Older ships - many far from worn out - are just not needed. There were 214 new ships delivered in 2015 and 225 ordered. Even if all the 350 laid up ships were immediately scrapped - there would still be too many ships chasing after too little cargo for unremunerative rates.

A ship that called here as recently as December 22 has arrived at the Bhavnagar anchorages, the last stop before the beaches of Alang. 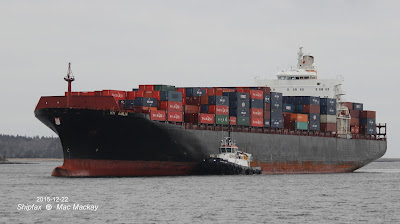 HH Emilia was known in Halifax for many years as Dresden Express, the name it carried from 1991 when it was built by Samsung in Koje, South Korea. The 53,833 grt, 67,713 dwt ship had a capacity of 4639 TEU - too small to be efficient in this day and age for most liner routes. Owners Hapag-Lloyd sold the ship in 2015 to Konig et Cie, also of Hamburg, and the ship worked its way round the world one last time on the Vespucci service with CMA CGM / Hamburg-Sud / UASC.

Although 25 years is a respectable age for a ship, it could have last longer had there been demand. Many newer ships are also going for scrap.Hapag-Lloyd alone has shed nearly 25 ships, representing 55,000 TEU.

The forced amalgamation of the two largest Chinese state owned container lines, due to continued losses, has also thrown a monkey-wrench into many of the established container alliances, with several shipping lines set to become big losers as they are "orphaned out" as some alliances may collapse.

The bulk carrier business is in equally bad or worse slump, with a 10% to 15% over supply of ships and rates dropping up to 80% in some sectors. More than 600 bulkers were scrapped in 2014 and 2015, but owners are still hurting. The Baltic Dry Index (a measure of rates) is at an all time low. Reduced demand for iron ore and coal in China, and a reduction in manufacturing output are at the root of the problem, but it is a double edged sword for the owners of surplus bulkers. Scrap steel prices have also hit rock bottom, although some do see a glimmer of improvement.

One reader of this blog cites an unprecedented number of bulkers and tankers leaving the Gulf of St.Lawrence with destination given "for orders". In other words, they are in ballast, they have no fixed cargo in the near future, and are heading in the general direction of some possible source of cargo. Gibraltar is one of those ports, where the ship can be turned for Europe, Africa, the Med or Asia.

Hard times in the oil patches all around the world have created a crisis in the support craft business. As exploration and development is cut back and production is cut in high cost fields, the number of laid up ships is astounding. The Gulf of Mexico and the North Sea are especially hard hit with hundreds of suppliers laid up and many companies seeking refinancing or creditor protection and some failing completely. Even suppliers with long term contracts have seen the contracts cancelled and have had to lay up the boats.

Rock bottom oil prices seem to have only spurred demand in some places so product tankers, those ubiquitous 50,000 deadweight ships that seem to come and go in Halifax daily, are still in demand and seem to be making money.

Add into this the fall out for shipyards, particularly in Korea, but also in China. As new ships are completed and fewer new orders come in  several yards have closed, some have been forced to merge and the South Korean government has had to step in and bail out may once profitable operations. Some shipyards in China were closed with undelivered ships still in the yard. Canadian shipowner Algoma was hit with three ships, one on builder's trials, when the shipyard was padlocked by the creditors.Fortunately Algoma's payment advances were guaranteed and they will be refunded, but it has meant a three year plus delay in getting new ships and they had to find another builder, to start from scratch.

Where will it all end is the big question. There is obviously some money to be made in scrapping ships - particularly high end naval vessels. The new facility in Liverpool, NS seems set to receive up to five RCN vessels over the next few years, and may well attract some domestic merchant ships. There are between six and ten Great Lakes ships that may go for scrap in 2016 and 2017. If the scrapper can sell steel for a reasonalbe amount that will only help.

Maersk Line, the largest container operator in the world is working with shipbreakers in Pakistan to improve health, safety and environmental upgrades and some yards in India have been certified with better conditions, but it will remain largely a third world occupation for the most part.

Meanwhile in other third world countries and the Caribbean, the ports will gradually fill up with abandoned, undocumented vessels, just as they always have, but it will be worse as there is no recoverable value from small old ships.

As for the shipping lines, there will be shakeouts, failures and perhaps some success stories. But it may be a long time before much confidence returns to the bulk and container sectors. Similarly there is little sign that the OPEC countries will turn the taps down or off, and cheap oil looks the way of the future. With the United States now self-sufficient in oil, will it matter? Only time will tell.