The long awaited fourth ship in the ACL fourth generation (G4) series made its first call in Halifax today. Under typically gloomy May skies, Atlantic Sky was in and out of port in less than 12 hours, working both containers and RoRo cargo.
Driving rain deterred this photographer from catching her arrival, but things had improved somewhat for the departure.

Atlantic Sky is clear of Fairview Cove and is lining up for the Narrows with assistance of the tug Spitfire III.

Built by Hudong-Zhonghua in Shangai the 100,430 grt, 55,828 dwt ship made an impressive sight as it glided out through the Narrows. 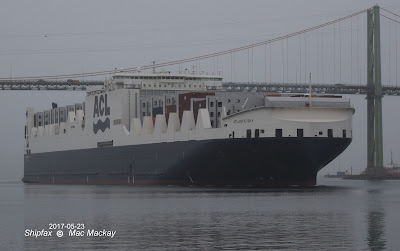 Despite the gloom and mist, the ship's white paint was almost glowing.
Note the unusual rubbing strakes on the ship's side. These are protection when using the Gladstone lock in Liverpool to reach the Seaforth Dock. The ship is 37.6m wide and the lock is 40m, so some scraping is likely to occur!

This ship, and the fifth member of the series were due to be delivered before the end of 2016. However both ships were held in the shipyard - possibly to deal with issues experienced by the first three ships of the group. Atlantic Sky conducted sea trails in July 2016, but it was not until March 22 of this year that owners Atlantic Container AB (part of the Grimaldi Group) accepted delivery.

The fifth and last ship Atlantic Sun conducted sea trials in November, but has not been delivered yet, and as a result the two veteran third Generation (G3) ships Atlantic Cartier and Atlantic Conveyor are carrying on into this summer. The first G4 ships are apparently still experiencing issues, and early drydockings for them may extend the lives of the G3s into the fall.