The name ship of the large Arleigh Burke class of guided missile destroyers made a brief visit in Halifax today. Tying up at HMC Dockyard about 1000 hrs, the ship sailed again at 1600, with the assistance of civilian tugs. 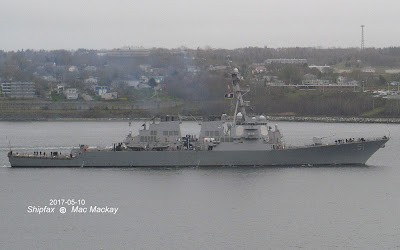 USS Arleigh Burke slips out of Halifax in misty conditions this afternoon after a six hour port call.

Launched in 1989 and commissioned in 1991 (and subject of at least one major refit) the ship was the first in a class that now numbers more than 60 ships.  The impressive looking vessels are cruiser size, but are classed as destroyers, and are the only destroyers in the current USN.

The namesake of the ship was one of the great USN figures in modern times. Despite relatively short stints of sea-time he was a destroyer hero in World War II ending his career as an Admiral and longest serving Chief of Naval Operations. He was also the first living naval officer to see a ship commissioned with his name.

The ship is based in Norfolk, VA.