What's in a name

As a self- proclaimed connoisseur of ship's names, I do like to see a ship that shows some originality in its name. Today I managed a bit of a double header.

First was the bulk carrier Desert Serenity, arriving fully laden from Baie Comeau. The ship tied up at pier 31 and was met by at least one fuel truck. It also appears to have taken on a couple of containers on deck (most unusual for a bulk carrier).

Built in 2008 by Kouan Shipbuilding Co in Taizhou, China, it was launched as Serenade. However it was renamed on delivery with the pleasantly evocative name Desert Serenity. The 31,091 grt, 53,280 dwt bulker is fitted with four cranes and is operated by The Greek owned, Marshal Islands based Atlantic Bulk Carriers Management Ltd. Their fleet has several ships with the "Desert" prefix. 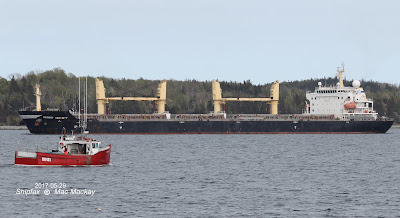 While arriving it passed a lobster boat, tending traps (the season closes in the Halifax area May 31.) Named Hurtin' Unit it was built in 2008 by Wedgeport Fibreglass Ltd. It is 12m long and 27.44 grt with a 200 bhp engine.

While difficult to see in a distant photo, Desert Serenity's hatches are tarped over. However the tarps did not appear to be in great condition, so perhaps that may have something to do with why it called in Halifax. It's destination is listed as Lagos, Nigeria.