Maersk and CMA CGM operate the TA4 service jointly from Antwerp, Rotterdam and Bremerhaven to Montreal and Halifax and back. As noted, of late they are using replacement ships as Maersk Pembroke had a broken crankshaft (or camshaft). With no ship last week on the usual Saturday, or sometimes Sunday, it was apparent that they had called in another replacement from the spot market. (Last month the Louis S was a late arrival substitute on April 24.)

The ship that finally arrived in Halifax today was RHL Agilitas. Flying the Liberian flag it is a modest sized ship of 18,480 grt, 23,665 dwt with a capacity of 1732 TEU. It is also fitted with two 40 tonne cranes. 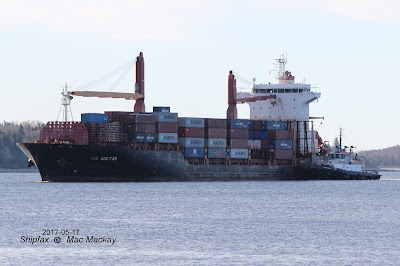 The ship was built as Wilhelm Busch in 2007 by Guangzhou Wenchong Shipyard Co Ltd of Guangzhou, China but was renamed on delivery by Reederei Hamburger Lloyd (hence the "RHL").
In this age of 20,000 TEU mega ships, a ship of this size looks puny, but one needs to remember that the first fully cellular container ships to call in Halifax carried barely 1,500 TEU! and they were thought to be huge at the time. 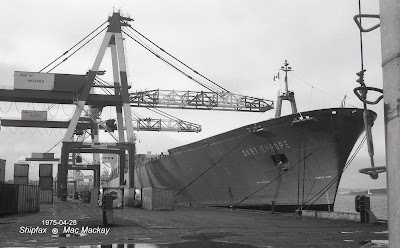