Monday May 29 was Memorial Day in the United States. As usual there was a United States military presence in Halifax, to  commemorate U.S. war dead. This year it was a color guard from a United States Navy submarine that did the honors.

All US subs are nuclear powered, and restricted to the Shearwater jetty in Eastern Passage (known to the RCN as November Alpha). The sub sailed this morning. 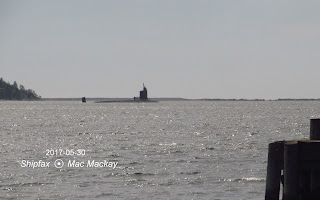 There are several sites in Halifax where US service persons are buried, including Deadman's Island in the Northwest Arm and Holy Cross Cemetery.