What could have been a serious incident was averted today more by luck than good planning.

The cruise ship Maasdam arrived this morning and tied up at pier 22 on one its regular visits. 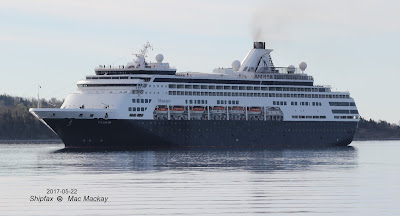 Maasdam gliding in to port this morning.
Soon after tying up it was joined by the tug Gulf Spray with its scow and motorboat, used to remove garbage and recyclables. The barge tied up on the waterside of the ship and the transfer got underway. Normally the barge (or sometimes more than one barge) remain beside the ship all day, along with the motorboat. The tug usually does not remain. 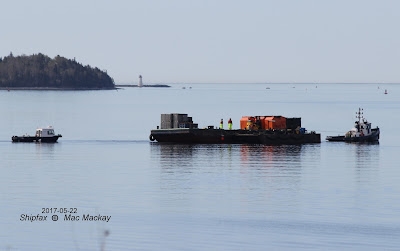 Gulf Spray sets out from the old Coast Guard base in Dartmouth to pier 22 to remove refuse from the Maasdam. The motorboat and barge remain alongside for most of the day.

Late in the afternoon the CCGS G.Peddle S.C. entered port and raced up the west side of George's Island, paying no heed to the barge alongside, leaving a significant wake, which tore into the barge tossing it about madly. 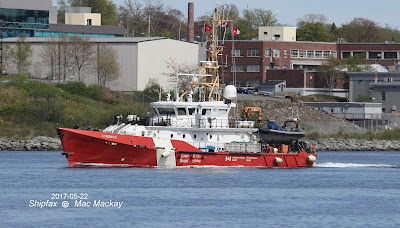 By the time CCGS G. Peddle S.C. reached the Narrows it was travelling at a sensible speed.

Fortunately the barge and motorboat crews were alert and took precautions, and there were no parted lines nor injuries.

This incident raises two questions:
1. Is the CCG immune to the harbour speed rules?  There was no emergency which would have caused the G.Peddle to exceed the safe speed in the harbour.
Who was on watch on the G.Peddle that could not have seen the barge alongside the cruise ship or would have been so unaware that there was likely to be a barge alongside?
The only objective as I could see was that  the G.Peddle was in "hurry home" mode.

There is a great reluctance by Halifax Traffic (and most VTS services) to interfere with the ship's master's conduct - but if there had been an injury or damage, I think Halifax Traffic would have been found to have a duty beyond that of a spectator like me. I could see a potential disaster about to happen but had no power to stop it. Halifax Traffic did have that power.