With intermittent fog and drizzle, there were a few opportunities for spot checks on the harbour over the weekend.

The Dutch company Vroon, active in tankers and the offshore, distinguish their ships with a large letter "V" near the bow.

Built by Hyundai Mipo, Ulsan in 2007 the 29,456 grt, 46,858 dwt product tanker is a slightly larger version of Irving Oil's chartered fleet, which are also owned by Vroon (known now as Iver Ships BV) and under long term charter.

Monopolizing number one anchorage for a few hours, APL Danube had to undergo Asian Gypsy Moth inspection before tying up at pier 41. The ship's last port of call before Halifax was Colombo, Sri Lanka.


In 2016 the ship was renamed NileDutch Orca for service with the family owned NileDutch, which as the name suggests operates between Europe and Africa, although its concentration is more on West Africa than it once was. It also serves North America and Asia. Earlier this year, the sip was reassigned to the Columbus JAX service and was renamed APL Danube. APL (American President Lines) is owned by CMA CGM through APL's parent company Neptune Orient Lines, acquired by CMA CGM in 2016. NOL and APL will retain their identity to a degree for a time. 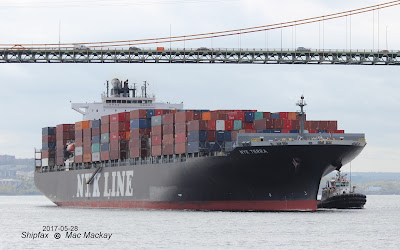 The tug Spitfire III has a line up on the port bow and Atlantic Oak (not visible)  is on the stern as NYK Terra passes under the A. Murray MacKay bridge outbound.

With a capacity of 6661 TEU (including 460 reefers) it is about equal in size to the OOCL ships that used to call on the G6 service, which THE Alliance has supplanted.