The 9,365 TEU CMA CGM Loire arrived this morning, tying the record for largest container ship to call in Halifax. Sister ship CMA CGM Tage set the record May 28, 2016 when it arrived for the first time.  We have not surpassed the 10,000 TEU ship yet, but that will happen this summer according to the Port of Halifax. 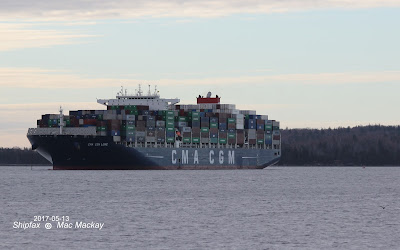 Early risers caught sight of the CMA CGM Loire in number one anchorage, where it under went Asian Gypsy Moth inspection.

CMA CGM Loire was built in 2015 by Dalian Shipbuilding Industry Company and measures 95,263 grt, 112,279 dwt. It also features the split superstructure of the larger ships. With the accommodation block moved forward for visibility, there is no superstructure aft except the engine casing and funnel.

The true bulk of the ship could best be appreciated from the Dartmouth side of the harbour. The ship carries some container stacks eight high. 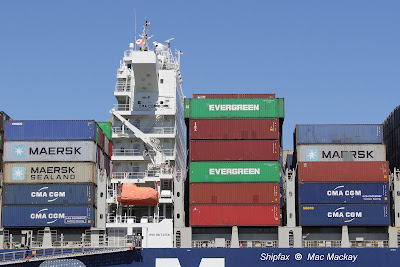 The bridge structure is thin and very high. 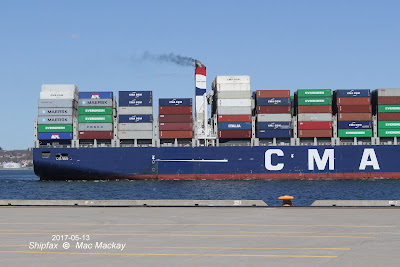 There is no superstructure aft, and only a funnel and engine room casing.

Early this afternoon the ship moved alongside pier 41 at Halterm aloowing for a close up look.


Meanwhile in Dartmouth, it was a busy day at the Industrial Estates pier. The Woodside annex of the Halifax Shipyard has been busy fabricating hull cradles to be used to support the various hull components of ships under construction. 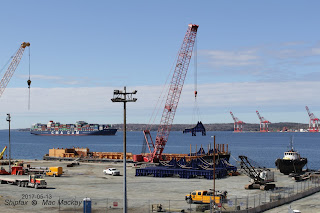 A giant Manitowoc crane was busy this morning lifting the cradles aboard the venerable barge Atlantic Sealion (once known as the Irving Whale, it spent 26 years on the bottom of the Gulf of St.Lawrence before it was raised in 1996.) 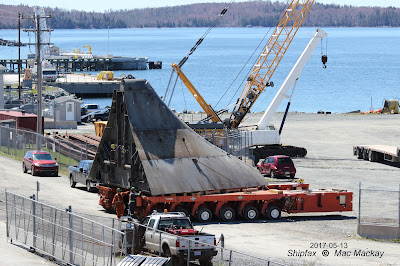 The Shipyard is also using the Woodside facility to fabricate complex bow and other shapes for the current program of Arctic Offshore Patrol Ships. The first bow was wheeled out this morning on a transporter and loaded aboard the Sealion. 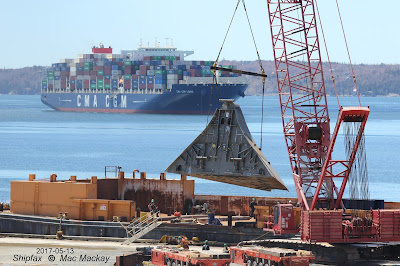 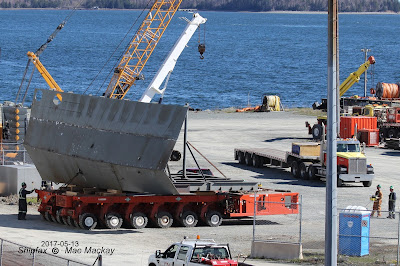 Other shapes followed, and soon after the moves, the rail line to Autoport was re-opened, as it had been closed all day to allow the transporter to cross the tracks.

Tomorrow the cargo will be transported to Halifax Shipyard and landed at pier 8. 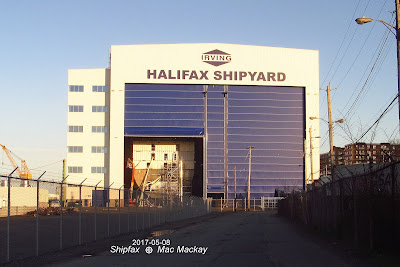 In due course the bow components will be connected to the well advanced hull of the first AOPV, to be named HMCS Harry De Wolf.

A puff of smoke on the starboard side is from an accompanying tug making fast.

Built in 2006 by the ShinA Shipbuilding Company of Tongyeong, South Korea, it is a ship of 25,467 grt, 40,000 dwt and is operated by  SCF Management Services Dubai.
ShinaA Shipbuilding was one of the victims of the global financial crisis and was declared bankrupt in 2015 and liquidated in 2016.