If you read this before, you might be further enlightened if you read it again - particularly towards the end, where several typos disguised the meaning. Some other corrections and additions have also been made.

Another week of frequent fog and rain might discourage some shipwatchers, but it brings about the little appreciated side benefit of ship's whistles. The sound of those deep throated bellows penetrating through the soup and echoing endlessly off downtown buildings is a wonderful feature of this port city.

Today's arrivals and departures, while largely unseen, were certainly not unheard. Of particular note was Oceanex Sanderling, which early this evening made the half hour or so move from Autoport to Halterm. It sounded its fog signal for the entire trip. Much of that time if was steering a nor'west to westerly course, which meant that its fog horn was pointed directly at the southern half of the Halifax peninsula. I hope everyone appreciated it as much as I did.

Normal comings and goings during the past week included another load of rail for CN. The huge demand for track upgrade sees pier 27 stockpiling thousands of tonnes, which is sent out on special rail cars  on an almost daily basis. Once the stockpile begins to become depleted, along comes another ship from Poland with another load. 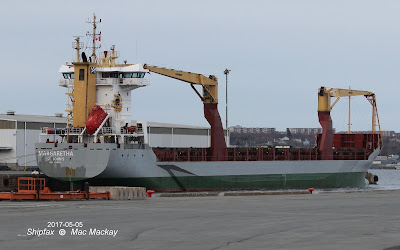 The ship's sponsoned hull - sure sign of a Damen and Carisbrooke ship - maximizes hold and hatch size while maintaining a narrower bow and stern.
The same ship was also here in January with a similar load.

The most recent ship arrived April 28 and sailed Friday, May 5. Margaretha discharged about 10,000 tonnes, using its own cranes. The ship is a popular type for this work, because it is built with boxlike holds, that help to keep the cargo from shifting. Its large hatches make it easy to pick the cargo directly from the hold without having to shift it within the ship.

The ship was built to their own standard design by the Dutch company Damen. The hull was built at their shipyard in Galati, Romania, but the ship was completed at the home yard in Hoogezand, Netherlands in 2002. Measuring 7752 grt, it it has a deadweight capacity of 10,526 tonnes.

It was built originally for Carisbrooke Shipping, based on the Isle of Wight in England. It was to be named Anna-C, bu t was renamed Hanna-C before launching. It was soon after renamed Corral then in 2006 Opal Ace and in 2009 became Hanna C. In 2012 it took its present name, and management was shifted from Carisbrooke to Reederei Rudolf Schepers GmbH+Co. It is registered in St.John's, Antigua.


I did observe on odd activity on Wednesday May 3 as the container ship  ZIM Constanza sailed from pier 42. The ship seemed to slide well south along the pier face, before its bow could be lifted off by tugs. Ships usually stay well clear off the end of pier 42 due to relatively shallow water. 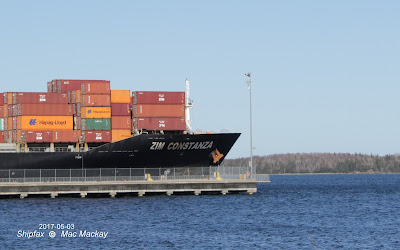 The ship's stem was almost even with the end of the pier - something rarely seen. The ship then reversed, and began to move off.

Once clear the ship took the normal outbound course.

ZIM Constanza was builtr in 2010 Jiangsu by Yangzijiang Shipyard in Jiangyin, China. It has a capacity of 4256 TEU (including 698 reefers)  and measures 40,542 grt, 50,170 dwt.
The ship (known by some wags as the ZIM George Constanza) is on the ZIM Container Service Atlantic (ZCA), from Haifa to Piraeus, Genoa, Tarragona, Halifax, New York, Savannah, Kingston, Tarragona, Haifa. This ship inaugurated the service June 28, 2012 and has been a regular caller ever since.