Two ships arrived in Halifax for the first time, both under slightly unusual circumstances.
Friday night's arrival is the bulk carrier Federal Kushiro. The Marshal Islands flag ship is a frequent caller to Great Lakes ports, but has come to Halifax to top off its grain cargo since it cannot load to full capacity in the shallow waters of the Lakes.

The ship was built in2004 by Shin Kurushima, Onishi, Japan for Fednav the large Canadian shipping company operated from Montreal. It was built to near Seawaymax size with a 19,223 grt and 32,762 dwt. It carries three 30 tonne deck cranes.

It sailed onto the Lakes November 14, unloading a cargo in Hamilton, ON then proceeding to Johnstown, ON to take grain. However due to the ship's high freeboard it was difficult to get the grain to flow from that port's loading pipes. Coupled with the draft restrictions of the Seaway locks, the ship could only take a partial cargo. Topping off in Halifax should be no problem since the grain spouts are mounted high enough to reach very large ships. Rain cut short the loading operations for today however, and the ship was idle at Pier 28 this afternoon. 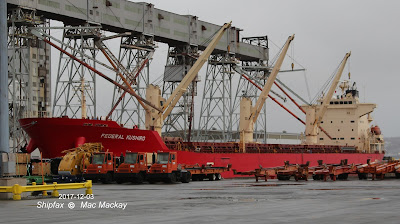 An unusual caller at Halterm was the Maersk Seletar. This is a US flagged ship, operating on Maersk's North Europe to east coast US service TA2 (with MSC) and is en route from New York back to Europe. The reason for its call was unclear to a casual observer, however it was noted that they were unloading reefer boxes. The demand for these in Halifax is fairly high for fish products and produce and that would be one reason for dropping off these particular containers. However the ship was working other cargo as well. 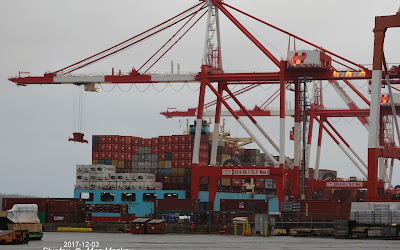 Also noted were the large number of Hamburg Süd containers, particularly aft. Maersk's takeover of Hamburg Süd cleared the final regulatory hurdle November 30 when South Korea was the 23rd jurisdiction to approve the deal (with some conditions). The arrangement now puts A.P. Moller Maersk's world-wide fleet at 773 ships (owned and chartered) including the 105 from HS. The company's container capacity is now a staggering 4.15 million TEU.

Maersk has a US subsidiary, which evolved from their takeover of Sealand Shipping a number of years ago. Maersk Line Ltd USA operates US flag ships, with US crews, but since the ships were not built in the US they are not Jones Act compliant. However since they are US owned and flagged they qualify to carry certain government and strategic cargoes that foreign carrier cannot. Maersk Seletar was built in 2007 by Hyundia Heavy Industries in Ulsan, South Korea for A.P.Moller Singapore Pte Ltd. It has a capacity of 6788 TEU, although Maersk lists a nominal capacity of 6648. (They are notoriously coy about actual ship capacity). It joined Maersk USA in June of this year.
Tonnages reported when built were 79,702 grt, 81,094 dwt, but now appear as 80,503 grt, 87,545 dwt.

Seletar is a district in Singapore, site of an early rubber plantation and a Royal Air Force Base. The latter is in development as an aerospace park.