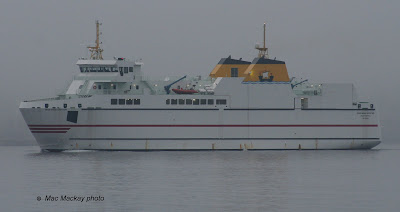 The brand new ferry Grand Manan Adventure arrived in Halifax today for warranty repairs. Launched in December 2010 by the Eastern Shipbuilding Group in Panama City, Florida, the 6580 gross tons vessel was to be delivered in May 2011. However overheating during builder's trials delayed delivery (hence the manana.) The ship arrived in Grand Manan on July 26, but still had to undergo owners trials, storing and certification. (more manana)

She finally made her first trip August 11, but on August 15 she had to be withdrawn from service for three days when both her bow thrusters failed during a docking. (mananas again)

She entered the Novadock floating dock on arrival today, and is expected to be in for a week (she is to be out of service for 10 days including travel time to and from Halifax.) Press releases indicate that one of the bow thrusters is to be repaired under warranty, but there will doubtless be other work to do.

The vessel she is replacing, Grand Manan V, is covering the Black's Harbour/ Grand Manan route in the interim. The "V" is now designated as the backup and summer season supplement.