Le Boréal will be back 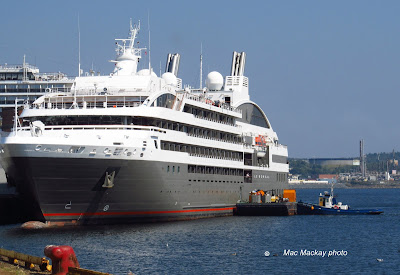 1. The vintage tug Gulf Spray and barge remove garbage from Le Boréal at pier 23 this afternoon.

I only had one chance for a photo of this one, and somehow managed to cut off part of the bow. Oh well, it will be back again twice on Boston/Montreal and Montreal/Boston cruises later this month.
The impressive Le Boréal is billed as a luxury mega-yacht by Cie Ponant SA of Marseilles, France. It has only 132 cabins (and 134 crew) and carries only 224 to 264 passengers. Built in 2010 by Fincantieri's Ancona yard in Italy (which is threatened to be closed due to lack of orders) the ship provides a superb cruising experience. It arrived today from France via the Strait of Belle Isle and St-Pierre et Miquelon.
On its next series of tours mentioned above, it will stop in numerous smaller ports such as Percé and Tadoussac, which are not usually visited by the larger ships.
I'll try for a better picture the next time.
In the meantime have a look at the website: http://en.ponant.com/Our-ships/Le-Boreal
.