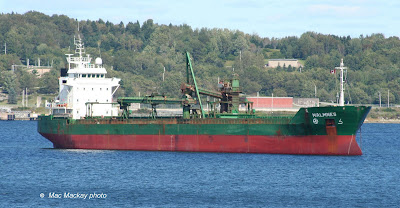 1. Malmnes lies at anchor in Bedford Basin, with Bedford Magazine in the background.


The small self-unloading bulker Malmnes finally made a move this morning after a lengthy repair session at Pier 9A. The Norwegian flagged vessel arrived July 28 and during the last 6 weeks had a major overhaul, which included removal and reinstallation of the unloading boom.

A frequent caller in Halifax for bunkers and repairs, she was also in port for repairs in March.

The ship usually carries crushed stone out of Cape Porcupine, but has been known to carry some other cargoes, such as a load of wood pellets in 2005, and china clay in 2007.

The ship is now anchored in the long term anchorages in Bedford Basin, awaiting the next assignment.

See comment below: Malmnes may well be a victim of the problems at the New Page paper mill in Point Tupper (Port Hawksbury) The mill and its parent company in the US have received creditor protection fom the courts. Citing high power costs, and a depressed world market for fine coated paper, the Point Tupper mill will continue to operate for a time in hopes of finding a buyer. As the major industry in the area, there is grave concern about the future of the mill. The many creditors (which may include the owners of the Malmnes) may have a hard time collecting on their bills if no buyer is found and the mill closes.
Posted by Mac at 3:01 PM