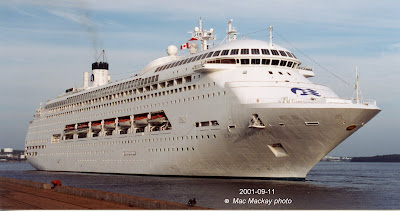 September 11, 2001 started out as a normal day in the port of Halifax. Soon after the arrival of four cruise ships came the news of tragic events in New York. The four cruise ships in port that day, Norwegian Sea, Amsterdam, Victoria and Crown Princess carried many US passengers. The port increased security at dockside, and many shore excursions were cancelled. Also there were changes in routine aboard the ships, and with special memorial services in place of entertainment.
Halifax International Airport was coping with 40 foreign aircraft, and their passengers, who were stranded here for several days due to the closing of US air space, however all the cruise ships resumed their usual itineraries, three of them heading for Sydney, Norwegian Sea returning to a permanently changed New York.
On September 12, 2011, Crown Princess returns to Halifax.
Posted by Mac at 3:22 PM