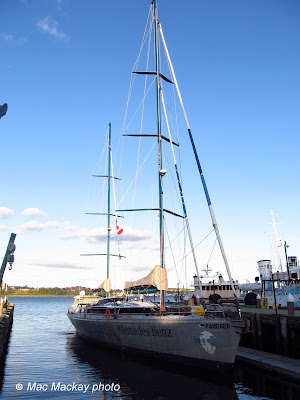 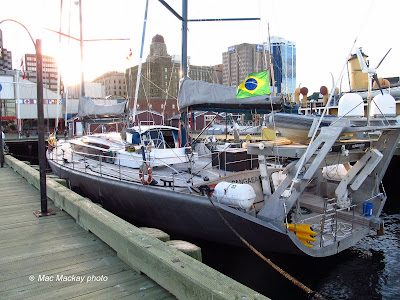 1 and 2 Pangaea flies the flag of Brazil, where it was built. 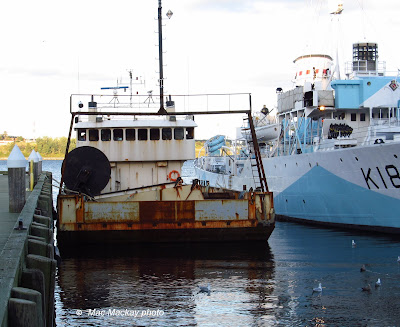 3. Nestled in next to Sackville, the Fundy Navigator takes a rest. A ramp is normally mounted on the ship's bluff bow, and a large reel houses nets for fish pens.

A pair of visitors at the Maritime Museum of the Atlantic dock last night provided quite a contrast.
The 35m research sailing vessel Pangaea was on the north side of the dock, after completing a Northwest Passage. Sailing from Vancouver in June, it made it through the notorious Arctic route, which has become largely ice free at times in recent summers. Built of aluminum, in Brazil, the yacht can accommodate 30. It left new York September 10, 2008 and on a four year expedition, funded in part by Mercedes Benz. Sailor/ecologist Mike Horn is the brains behind the journey. I will not refer you to specific websites, because I think they may be corrupted, but there are several references to him and the trip on the web.
By contrast the utilitarian Fundy Navigator was tied up on the south side of the same pier. Featuring a huge open deck forward and a net reel, the vessel is used in fish farming. It is also equipped with a bow ramp, which during this trip was lashed down on deck. Once stormy conditions from the passing Hurricane Maria eased up, the ship sailed. It was built in 2003, measures 142 gross tons and is owned by Cold Ocean Salmon Inc of Black's Harbour, NB.