The Shape of Things to Come

1. Algoma Mariner rounds the end of the jetty to come alongside.

2. The ship glides intpo pier 26 using its thruster and main engine to stop on the mark. 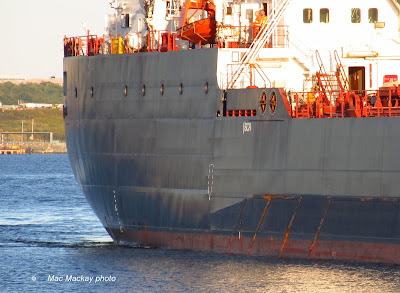 3. An odd shaped transition plate may be a hint at the ship's interesting history.

With both of Canada's major merchant fleet operators in the building mode - and both in China- expect to see more brand new Chinese-built Canadian ships over the next few years. CSL (Canada Steamship Lines) and Algoma Central Corp have both ordered new Seawaymax sized ships to take advantage of the forgiveness on import tarifs, and to replace aged tonnage.
Today's arrival marks the first new ship to be built in China, but it is a "one off" and not part of the larger order of new vessels. Indeed Algoma Mariner is, at least in part, the result of an accident, rather than a plan, but it is nonetheless an important moment.

Algoma had originally planned to build a new forebody for two of its ships, Algobay and Algoport. The new forebody was grafted to the existing stern of Algobay in China, where the stern was also refurbished, including installation of a new main engine. It was redelivered in December 2009 and entered service in the spring of 2010 (its first call in Halifax was to load gypsum, September 11, 2010.)
Things did not go as planned with Algoport. The ship sank in tow en route to China September 6, 2009. With the new forebody under construction, it was decided to build a new stern section to attach to it. That ship became Algoma Mariner built by Chengxi Shipyard in Kiangyin, Jiangsu, China and delivered in June of this year. After its inaugural trip to the Great Lakes in August, it has carried iron ore, coal and grain.
As a side bar to the above, the ship was originally to have been called Canadian Mariner because it was to be delivered to Upper Lakes Shipping. ULS and Algoma were partners in Seaway Marine Transport, a company that operated the ships of both fleets. The rebuilt ship was to be assigned to ULS.
However during construction Algoma Central bought the ships of Upper Lakes Group, and is integrating them into the Algoma fleet. This ship never sailed as Canadian Mariner, and was delivered under its present name.

For more on the new shipbuilding programs see:
CSL's ships to be called the Trillium class: