Salt for grain for gypsum 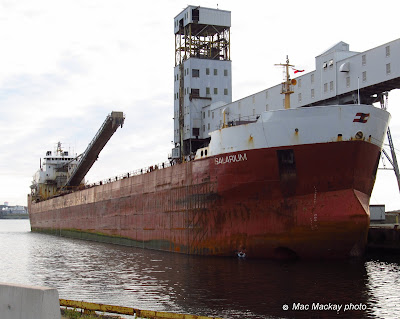 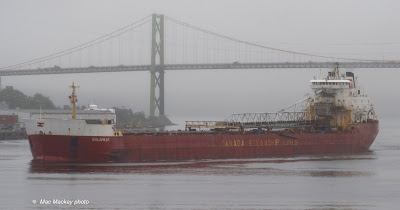 2. Loaded to Seaway draft with gypsum, the ship sails out through the Narrows this morning. 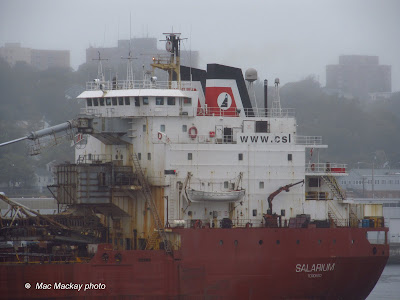 3. Rust streaks around the ship's unloading gear show the damage caused by salt. The Mines Seleine logo has been superimposed on the CSL funnel.


The CSL self-unloader Salarium brought in a load of grain this week, and unloaded at pier 26. Last evening it moved to National Gypsum and sailed this morning for Côte Ste-Catherine, QC. Due to St.Lawrence Seaway draft restrictions of just over 26 feet, this was not a full load for the ship.
Salarium was built in 1980 as Nanticoke, even though its intended name was to be Gleneagles, a traditional CSL one. It was named instead for the new steel mill at Nanticoke, ON, which the ship would service. Built in Collingwood, ON, it is similar to other ships of its type, able to make coastal ocean voyages, but is smaller in tonnage than the Atlantic Erie and Atlantic Superior and Atlantic Huron.
In 2009 it was placed on a long term charter to Mines Seleines (part of Windsor Salt) to carry salt from the Magdalen Islands to Great Lakes and east coast ports, and renamed Salarium. It replaced Algoma's Saunière, which had finally succumbed to the ravages of salt exposure and has since been scrapped. The charter does not preclude the ship from carrying other cargoes, if it can keep up with the demand for salt.
As an older ship, with the prospect of severe service ahead, and the impossibility of protecting it from its salty cargoes, it is fair to wonder how long the ship can be expected to last. It is certainly a pretty hard looking case now.
Posted by Mac at 12:48 PM