As some Maritimers say, it was a large day (meaning beautiful, sunny and warm.)
It was also a large day for the Port of Halifax, with four cruise ships in port and about 10,000 extra people on the streets of town (passengers and crews included.)
Some of the ships were large too, but the interesting thing was that of the four, three were on their inaugural visits to Halifax.

1. Seabourn Sojourn, built in 2010, with a modest capacity of 450 passengers, arriving for the first time in Halifax this afternoon. It will stay in port over night. 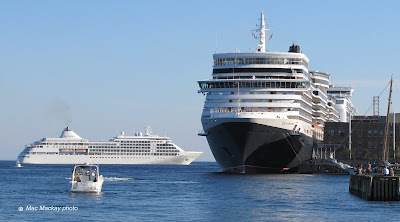 3. The one they all came out to see, Cunard's Queen Elizaberth is just a year old and claims a passsenger capacity of 2,092. It measures 90,901 gross tons.

4. Although it was built in 2007, Emerald Princess is also making its first call in Halifax. At 113,561 gross tons, it was the largest ship in port today. It sailed at dusk, making an impressive sight.