Work on the Halterm pier extension reached a milestone this week when McNally Construction drove the last pile. Much work is yet to be done to meet the April 2012 completion date, but progress is certainly visible. The new concrete deck structure now extends about one third of the way out to the end. 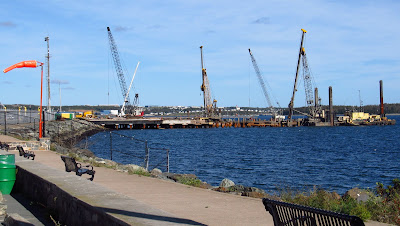 As we last heard in June, Halterm was seeking prices to add two new super post panamax cranes. Not a peep has been heard since, so perhaps they have had second thoughts after losing two lines and one half of another line's calls. To add new cranes they will almost certainly decommission the two oldest cranes that date from the 1970 opening of the pier (such as the one shown). Halterm is operated by Macquarie.

Meanwhile at Fairview Cove work has started on dismantling one of the oldest cranes on that pier. There are currently six cranes at Fairview Cove, 3 of 40 tonne and three of 60 tonne (or 65 tonne depending on who you believe.) No announcement has been made on replacements for these old cranes, but I find it hard to believe that this busy pier could get by with fewer cranes for very long. Fairview Cove is operated by Cerescorp. 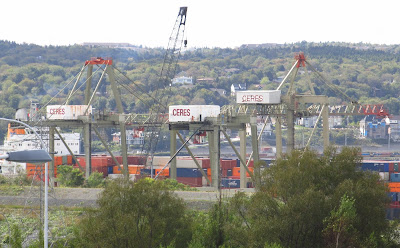 3. One of the small 40 tonne cranes has been removed from the pier face and is being dismantled. The two remaining small cranes work the Ludwigshafen Express this afternoon. 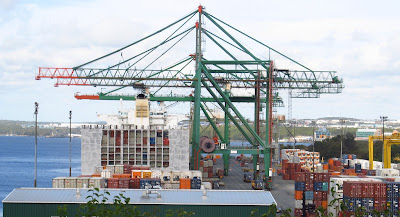