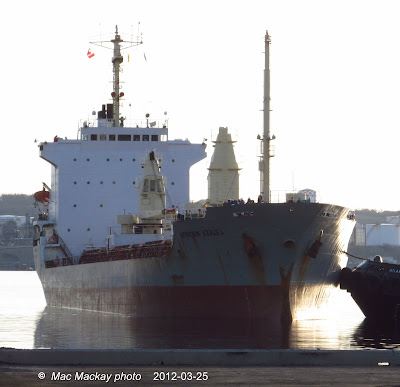 The small bulker African Azalea arrived on Sunday March 25 to load food-aid grain. While berthing at pier 28 there was a change of orders and the ship backed out of the camber (with tug assistance) and instead backed in.
This change was likely brought about by the subsequent arrival of Stellanova at pier 27, which needed more room.
Loading was completed by Thursday and the ship sailed the evening of March 28.
Built way back in 1978 it is a very old ships by today's standards. It is one of a fleet of sister ships built between 1978 and 1980, with similar names, such as African Dahlia, African Evergreen and African Gardenia (which have all called in Halifax and are noted on this blog) and African Camellia, African Fern and African Begonia. They are all employed in food aid grain delivery and are Greek owned, flying the Liberian flag.
Built at Shimoda Dockyard in Japan, African Azalea measures a modest 6502 gross tons and 8986 deadweight.
.
Posted by Mac at 9:03 PM